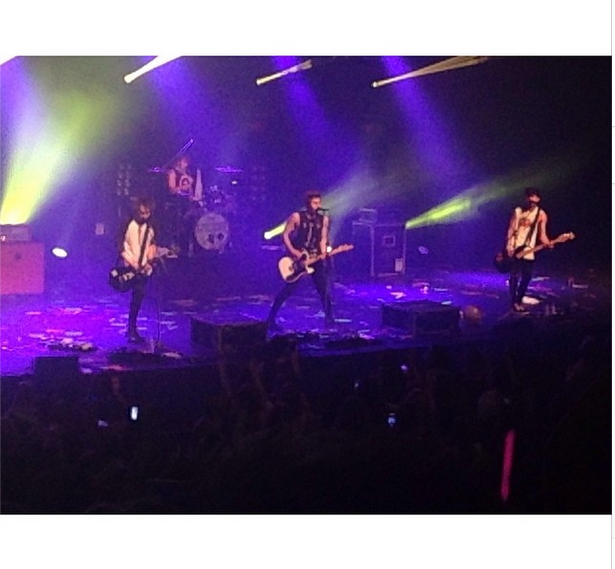 Arriving back in the homeland not too long ago for their There's No Place Like Home tour, the foursome of Sydney teenage boys finished the tour too a sold out Riverside Theatre of screaming girls last night. Arriving in Perth for the first time since the One Direction's Take Me Home Tour in September, the band were welcomed by many eager fans at the domestic airport, causing security to rush the boys straight to their waiting car without meeting many fans.

Riverside Theatre was noisy with excitement of the 2,500 fans who has secured tickets to watch the final show of the tour. Merchandise desks had lines out the doors and actually getting to your seats was a bit of a struggle.

Support act, UK solo artist Mike Dignam performed a half an hour set to the crowd, many of who were singing the words to his original song right back at him. 24 year old Mike's acoustic performances can be likened to the + album from Ed Sheeran. With fans in the audience, Mike delivered a beautifully sounding and entertaining first set in Perth.

During the interval the crowd their own fun, with whole audience performances of songs such as Rick Springfield's Jessie's Girl and Wheatus' Teenage Dirtbag.

After the half an hour interval the lights were off and the sounds of Jet's Are You Gonna Be My Girl were pumped through the speakers, the crowd singing/yelling the lyrics in anticipation of the band entering the stage. First to run on stage after the song finished was the ever energetic drummer Ashton Irwin, followed closely by the excited bass-player Calum Hood, lead singer and guitarist Luke Hemmings and finally guitarist Michael Clifford. Clad in their signature "punk rock" looks the band immediately launched into the unreleased Eighteen, which even though unreleased did not stop the thousands of girls from knowing every word. Thirteen songs were preformed, along with he throwing of glow sticks straight at the boys half way through the set. I would like to take this chance to appreciate their stage presence, I swear they didn't stop moving and jumping around the whole night (with exceptions of Ashton, who's drum kit was quite confining.)

The night ended after an encore performance of The Romantics What I Like About You and Try Hard saw everyone that hadn't previously got merchandise once again lining up with he line continuing out side doors and into the rain, which fans obviously found as a small price to pay to represent their favorite band.

Sydney kids, you can see 5SOS in Martin Place on Thursday for a free Sunrise performance, the rest of Australia can catch it on your TV's from 6am.
music