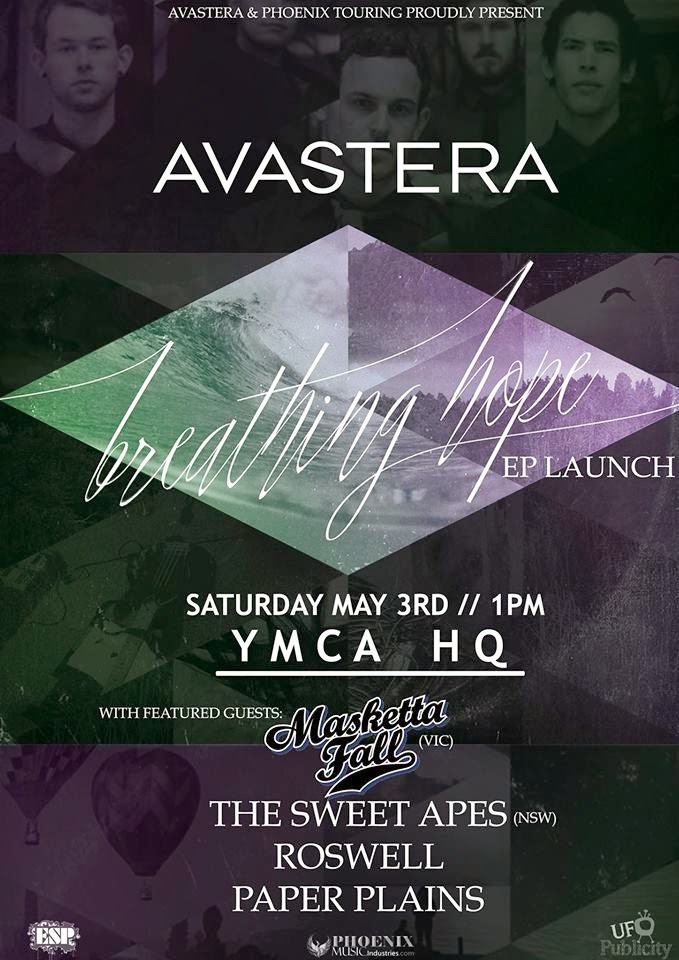 First to hit the stage after the one o'clock doors open was Perth locals Paper Plains. The pop-punk band consisting of Matt Ringwood on guitar and vocals,  Jess Allen on bass, Patrick Gengler on guitar and vocals and Dave Meyrick smashing it out the drums. Playing a set consisting of five original and catchy songs, the band showed just some of the talent that Perth has to offer. You can find the band here: https://www.facebook.com/paperplainsperth

Next up was female fronted band Roswell. Also hailing from Perth the four piece with a similar sound to The Wonder Years consisted onf Katt Nelson on guitar and singing lead vocals, Jake Street on bass, Jake De Hoog on drums and Paul Bovenkerk playing guitar. One song of the set 100% stood out for me Avoidance Is My Middle Name. You can find the band here: https://www.facebook.com/RoswellPerth

Traveling all the way from Sydney to play three shows here in Perth, the also female fronted post hardcore five-piece, The Sweet Apes took to the stage. First of all, lets talk about how absolutely freaking amazing vocalist Ray Vavasis is. Her voice is honestly my favorite thing I heard all day, like seriously her voice, I just wow. The boys backing here were an incredible band of people as well. Paul D'Alessandro smashed it out and gave it his all on the drums, while Brandon Robertson and Paul D'Alessandro backed up the vocals with their guitar skills. Bassist, Miki Rich held a strong stage and sound presence throughout the whole set. This band is definitely going to be one of the next to blow up and make their music very well known. You can like them and find all their music here: https://www.facebook.com/TheSweetApes

Playing to release their brand new EP 'Breathing Hope', (which is available on iTunes here: https://itunes.apple.com/au/album/breathing-hope-ep-ep/id870426035)  Avastera made an impact on the small crowd. Although playing with no backing tracks the band still gave it there all. The alternative five piece band made up of Dylan Symonds with his lead vocals, Chris Hanssen on guitar and vocals, Dave Thoomes playing the bass, Chris Crole on guitar and Jarryd Price on the drums. The band, just like the band before had a very talented vocalist with an amazing band behind him. Lets be honest, this Perth band needs more support then what was shown yesterday at HQ. You can find Avastera on Facebook here:https://www.facebook.com/avasteramusic

Playing up last was Melbourne band Masketta Fall. After the leaving of bass guitarist Ryan Spiller last year, the band played with bass backing tracks. Lead singer Braden :"Fay" Daniel and his pretty rad vocals, along with Daniel "Moli" Molivas and Ben Downing on guitars made the stage their bitch with their stage presence. Jamie Ross and his silly facial expressions kept ythe crowd entertained while he wasn't making a loud noise on the drums. The band played songs from both the Something Beautiful EP and the new Parachute EP, as well as a cover of the Mr Brightside by The Killers.
After their set and a brief hang out with bands and the audience, Masketta Fall took to the grass across from HQ for an acoustic hang featuring songs from Panic! At The Disco and All Time Low, and more.
You can find Masketta Fall on Facebook here: https://www.facebook.com/maskettafall

Note: I have legit one photo from the whole afternoon and its not even clear so when I find links to photos from the photographers of the day I will 100% link them to you.


And time for a cute little rant, that's not really all that cute.
So, on Facebook 83 people clicked attending on the HQ event, when in reality less the probably thirty people walked through the HQ doors. Now this rant isn't all about the audience, its about the bands as well. During the other acts some bands were more interested in being outside, there for attracting a lot of the crowd with them. For instance The Sweet Apes started their set with I think it was six people actually inside watching, none of them from the other bands.
The base of this rant is:
a. do not click attending if you're not planning on going.
b. don't show up for one band and show no support for the other bands playing. and finally,
c. If your a band and instead of watching your supporting band play your outside, you're doing it wrong.
music