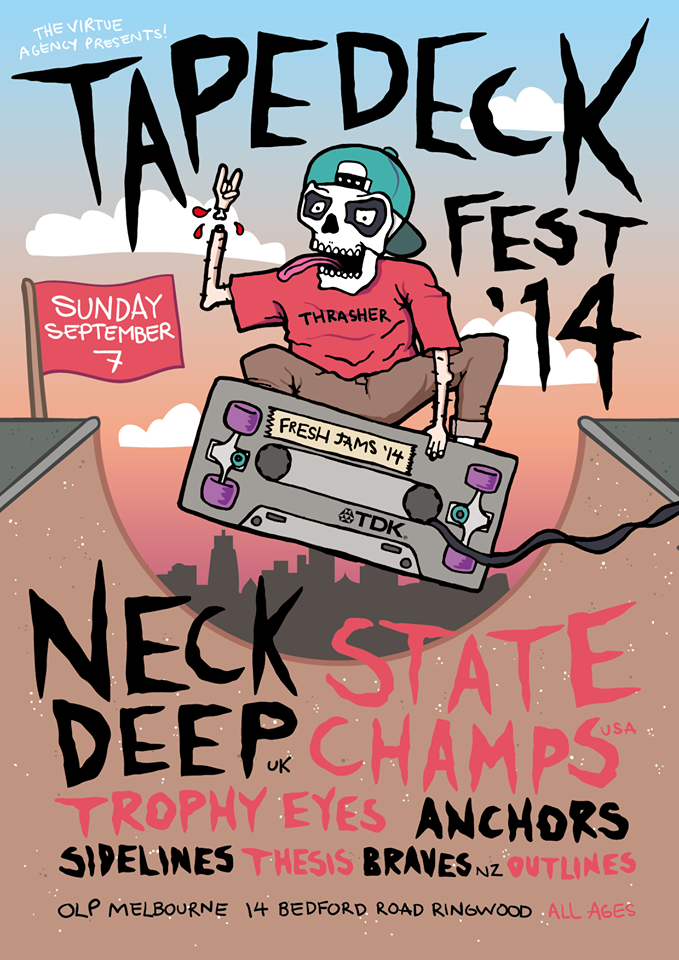 This past week is shaping up to be a pretty rad week to catch some local music at a venue near you pretty
soon!

Tape Deck Festival
For those of you over east, the Tape Deck Festival in system have finalised and released the line up for this year. UK band, Neck Deep along with State Champs from the USA are co headlining. Also playing on the gig is Trophy Eyes who recently signed to Hopeless Records (huge congrats for that boys!), as well as Melbourne band Anchors. All the way across the ocean, Graves are joining the line up and Thesis from the Sydney suburbs. Bendigo, four piece Outlines and Melbourne's own Sidelines complete the lineup. Sunday September 4, OLP Melbourne, don't miss it men!
You can get tickets from this link: http://tickets.oztix.com.au/?Event=43531

I Believed Tour.They've only just finished with tours and EP's and such, but With Confidence and Forever Ends Here have teamed up to bring their music around Australia. Both the Sydney bands will be five dates around the country for you enjoyment. Brisbane don't be too sad, the boys reassure that they have your announcement coming up soon! In case you've missed the Facebook posts, its suggested that you pre order your tickets pretty soon because it doesn't look like there is going to be many door sales. You can find the dates below and get you tickets here: http://thevirtueagency.oztix.com.au/
>Saturday, 7th June, HQ, Perth AA

This tour was announced a while ago as the last tour for For Our Hero. But this week they announced their support acts for upcoming shows. Make sure you pick up some tickets to see this amazing band play one last time under the name For Our Hero.
Date are listed below with support acts.
>Thursday, 22nd May, Hot Damn, Sydney 18+.
with A Sleepless Melody,
tickets at door only

So there is a list of  tours coming up! Don't miss your chance to see some awesome live music in your own city!
music