on April 07, 2015
If you were not expecting me to write at least one post on the new All Time Low album you must be new here.
But seriously, there is a new All Time Low album and even though it was released in Australia on Good Friday (sorry US, who I heard only got it today?), it was the most exciting thing about Easter to be honest (I'm lactose intolerant, its understandable). So without further ado let me get really excited while I talk about my favourite band, and probably sound like a fangirl, oh well.

Alright, I've read other reviews on Future Hearts and more often then not there was more talk about how the music didn't push any boundaries after previous album Don't Panic. This it true however I am totally okay with this because the album sounds like, well All Time Low. It's sounds more Dirty Work than So Wrong Its Right, more pop, less punk but it works relatively well.

Lets talk about the first singles Somethings Gotta Give and Kids In The Dark, they both had me and every other All Time Low fan in the world pretty damn excited for the release of the album. Both songs were the closest in sound to the bands previous release of Don't Panic which is why so many people were confused when you could stream the whole album and after the first few songs the sound of Don't Panic began to fade away into something completely different, good different, but different.

The album features two collaborations Tidal Waves featuring Mark Hoppus and Bail Me Out with Joel Madden and in my opinion, one was a hit and one was a miss. Lets start with the hit collab, I would like to personally thank the person in the world who came up with the idea to put both the voice of Mark and Alex in one song because I am forever in your debt. I have so much love for Tidal Waves, definitely a highlight of the album. Now to my least favourite song of the album, Bail Me Out. This can be put down to two things: its either because I don't like 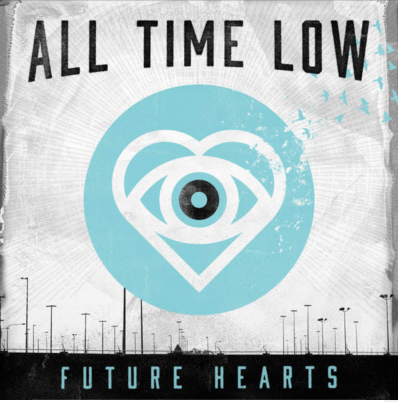 Joel Madden or its because YOU CAN HARDLY HEAR ALEX. It doesn't sound like an All Time Low song it sounds more like Joel Madden featuring All Time Low and guess what I'm not a fan of that.

Title track of the album Old Scars/ Future Hearts is a definite plus of the album, its such like its combining the history of All Time Low and the future of the band and wrapping it up into a song that represents the band so well, and by putting the title track at the end of the album, it feels like a conclusion (obviously not to the band, because the day that All Time Low concludes there will more than likely be tears)

Favorite songs on the album I hear you asking? There is a few so get ready for this! First off is Missing You, I feel like this is a familiar All Time Low song, it reminds me so much of Therapy but its a little bit more happier? Does that makes sense? Probably not. Dancing With A Wolf  is also SO GOOD, its kind of angsty and I absolutely love when the guys to do these kind of songs, also Alex's voice in this is an A+. Finally, another standout of the album for me is Cinderblock Garden like what kind of name is that? But this song is a definite jam, especially when driving along. (People probably drive past me while I'm like jamming out to these songs and judge me so hard, oh well.)

In all I'd say this album has proved to be a success for the band, who as I found out the other day by going way, way back through my iTunes Library, I've been backing for over six years!?!?! I love this band and I'm probably bias to the album because of that but I think this is such a great bunch of music.
Overall rating: seven / ten
music