on May 10, 2015
Okay so GTM Bunbury was over two weeks ago, so I'm a little bit late (I was also late on my Soundwave post if I remember correctly, so lets make it a ritual, all future posts about festivals will be at least a week late) but that's okay because it is here now and I am struggling to remember who I actually saw so let me find a timetable to jog my memory.

So firstly, in case you don't live in WA or have any idea about this states geography Bunbury is a smaller city about two hours south of Perth, so to get to GTM it's basically a road trip. However, this year (partly because I was the only one with a license and had no idea how to get to Bunbury) a pal and I decided we would catch the bus. GTM provided a few buses that would leave from right in the city and you'd get to the showgrounds, and then it would bring you home again that night, all for $25. Basically its a great idea for people who: a) don't have a license, b) don't want to pay for fuel or accommodation, c) want to drink at the festival or d) all of the above.

GTM Bunbury, as I have discovered unlike some of the other dates of the festival has four stages: [V] Stage and Triple J Stage, which are the stages you play on if you are a bigger somebody in the music business than the people who play on the Moolin Rouge Stage and Mootown stage, that being said the latter two were pretty popular with attendees.

I'm not even going to lie the main reason me and my pal even brought tickets to this was because You Me At Six were playing and that had us pretty damn excited, we didn't really care about the rest of the line up but still had fun anyway, yay!

The bus got to the showgrounds at 11 but we were pretty aware that the first band we knew that were playing weren't until 1:05, so what was the logical choice here? Maccas, which was obviously pretty crowded, you had pre-drinkers who were dying for a McNugget meal, campers who just wanted some hot food, and then people like us who just wanted to kill time with a frozen coke. After wasting hardly anytime at all we made the brave choice to head into the festival with at least an hour to go until the first act we wanted to see. (thank you for your words of kindness at this hard time)

First up was none other than Northlane and oh my god how good are they live!! Like I appreciated Adrian, but Marcus brings something else to the table entirely. I would also like to give a point to Northlane for the hectic circle pit their crowd had, like that shit is hard to get you're crowd to do sometimes and they were just all up for it, so congrats for that. Highlight song (for me, soz not soz) was 100% Quantum Flux, like that was just a SUCH A GOOD opener.

From the end of Northlane's set to about 3 we were once again stranded for something to do. BUT at three something magical happened. Right now you're smirking because usually when you're talking about a festival and something magical your mind goes to different places, but in fact what actually did happen was: WE MET YOU ME AT SIX  yes the most exciting thing of the whole day was 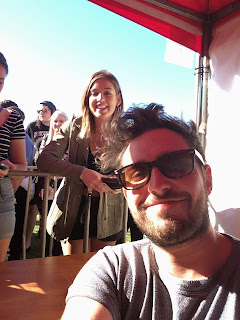 spending five seconds making awkward but pleasant conversation with five band members, and breaking the securities rules with Josh Franceschi as we took a selfie which kind of turned out to look more like me photo bombing him. None the less I now have YMAS signatures and a Josh selfie in my life, which was definitely needed.

After we had finished slightly freaking out over the above, which I'll be real took longer than I care to admit we made the painfully slow and frustrating trip to [V] Stage to watch Sticky Fingers, who I would like to award with the most sweaty and pushy crowd of the day, congratulations on that guys, well deserved. No but seriously we were pushed up against the back fence (which next time can they please put padding on or something, thank you) and it was so hard to actually see the stage because every girl and their lace, mid drift showing crop top was on the shoulders of some poor guy, whether they knew each other or not. In conclusion Sticky Fingers were 10/10, their crowd was like a four.

It was basically a race against every other YMAS fan at the point that Sti Fi headed off stage to get the barrier, which we almost won. We were like those kids in movies who are winning the whole race but at the last second turn to smirk at a competitor and lose their footing. However we got second from barrier and that was somewhat okay for us to deal with. During the hour and a bit wait for You Me At Six to take to the stage we were entertained by the big screen showing The Preatures, You Me At Sixes technicians and the ability for the girl next to us to read the extremely small writing that was the set list (yay for her because both me and my pal couldn't see anything without our glasses on.)

You know that point that the band members besides the lead vocalist are on stage and everyone is like 'omg where is he/she', yeah we didn't have that because we could clearly see Josh on the side of the stage enjoying his (probably mid-strength) beer and nodding his head along as the four other members of YMAS pumped up the crowd. The set contained some tricky kicking skills by Josh, some very-out of pitch singalongs by the crowd, quite a few sets of boobs being brought out during Reckless and some ridiculous crowd surfers (appreciation comment for the guy who ended up with one leg on either side of my head, much love.) 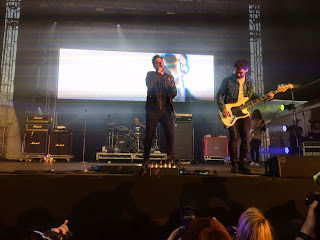 You Me At Six left the stage much to everyones (well mine mostly if I'm being honest) dismay and out came Ball Park Music. I didn't watch much of their set (hello I needed food), but it was their rendition of the theme song from Friends, that had most of the 20,000 strong festival-goers stopping and singing to the random person next to them.

Hermitude were an act that before GTM I had never even heard of, it wasn't until I was that cold that we decided to steal the warmth (and use other people as wind breaks) by heading into their crowd that we begun to appreciate just how freaking good they are, like yes hello why did I not hear about you earlier?

I'm all about girl power and all that jazz, and someone who brings it every time is Charli XCX, playing some of her most popular songs like Boom, Clap, Break the Rules and Sucker, but also adding in the popular ones shes guested on, like a rendition of Iggy Azaleas Fancy and Icona Pop's I Love It she had the crowd dancing and singing along the whole hour she graced us with her presence.

We finished off the night, as many people did, dancing and singing along with Hiltop Hoods. I'll be honest I'm not the biggest HH fan in the world, but MAN can they put on a freaking awesome show! I probably knew a good four or five out of their whole set but it was defiantly a fun one to watch.

There we have it! My recount of what I can remember of Groovin' The Moo 2015!