on October 08, 2015
I was just looking in my Tumblr ask box and realised how many questions I had from the last time I did a Q&A post and said 'You can ask me questions for the next post on Tumblr', so today I thought I would answer some more of the questions that people have asked me recently (still trips me out that people actually want to ask me questions). I don't really have much else to say, its a Q&A its pretty straight forward so lets just get into it I guess.

Are you a good liar?
I am so, so bad at lying to people. I'll either start laughing because I know that I'm lying or I will successfully pull off the lie and two seconds later feel guilty about it and confess.

You can press a button that would make any one person explode, who would it be?
OOOOH THATS A GOOD ONE! I can't even pick one person and feel like I can justify making them want to explode. I mean I can list off a few people I would happily never have to deal with ever again but making someone explode is a little drastic.

How do you deal with people who piss you off?
I'll either get mad and make sure they are well aware than I'm angry, or I won't deal with it all. I usually go for the second one and just won't bother because usually I'd end up looking like a crazy bitch.

Can you post more music ones?
I think I might have some music related posts coming up :)

If you could change one things about yourself what would it be?
Probably how stubborn I am, if I think I'm right I won't listen to what anyone else says and it gets me in so much shit because people will try to tell me something and I'll acknowledge what they're saying but won't act on it.

Do you hold grudges against people?
Not usually, unless you do something really, really bad. Normally, I can't be bothered being in ongoing arguments or having some ongoing tension that I'll just be like 'you know what I don't care anymore, we all good girl.'

Who is your phone lock screen?
Luke Hemmings in his red flanno, because yes I'm still a little 5sos fangirl. 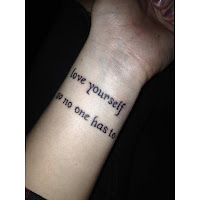 Did you get an All Time Low tattoo!!!???
I did! Me and a friend used to always talk about getting All Time Low lyrics tattooed on us when we were younger and once I turned 18 I was like you know what I'm going to do it! So now I have 'love yourself so no one has to' from Therapy on my wrist, I'll put a photo on the side!

Have you finished school? What do you want to do if you have finished?
Technically I've finished, I just have the WACE exams to go and then I graduate in December. I have no idea what I want to do with my life when school is actually fully over, but I guess I'll have to figure that out pretty soon.

How do I impress you?
Just don't be a dickhead.

Do you have people that you hide your blog from?
I used to never want people I actually knew to read my blog, I didn't want them to know about what was going on in my life, like all the mental illness stuff, I didn't want to share that with people that I saw on a regular basis. However, now that I'm somewhat better I don't really mind who reads what I post, like its on the internet, anyone and everyone has access to what I have to say, so I guess the more people that read my opinions and experiences the better.

That is all for now my loves! Don't forget to ask me questions on my tumblr so I can answer them in the next Q&A.