on January 02, 2016
There's something odd about it being the second day of 2016 already, there is also something odd about the speed at which 2015 seemed to come and go. It's hard to summarise 2015 into a few short words but i'll give it a crack, 2015 was entertaining, challenging, fun but above all it was a year I created lots of memories and learnt lots of lessons. I could go through and recount the events and experiences that were a lot more general, but you would already know about them, so lets get personal, let me tell you about things that happened to me this year and why they're significant to me, let me recount 2015 from my point of view.

I found myself surrounded by a new group of close friends, except some of the people I had known for years but only this year was it that I came out of my shell enough to let people in, to let people get to know me and stick around to make great friendships that I can see lasting for a while.


I put myself into situations that I struggled with but by the end of it I was glad that I had done it. The thing here that sticks out is spending a whole week with hundreds of people I didn't know in a place I had no clue how to navigate. Anxiety kicked in as soon as I got there but by the end of night one I'd made at least one friend and by the end of the week I'd made a few more- most of them I still speak to now.

I traveled to a different state to see my favourite band in world- only to have it pour down with rain, cutting their set short and blowing all their amps. This was probably the most devastating thing to
happen to me in 2015, I'm not going to lie, I was emotionally wrecked that I finally had the chance to see All Time Low live and mother nature just came in and messed it all up. However, I can now say that I've seen the band in the flesh and been involved in a no-instrument, just Alex and the crowd rendition of Weightless, so that is something.

I drank too much alcohol. Okay so I didn't become a legal adult until September but I'm not going to lie and say that up until that point I hadn't touched a drop of the stuff. (disclaimer: I am not encouraging under-age drinking, no one sue me please).

I started making decisions for myself and not to please other people. The biggest example of this was most definitely my decision to pull out of WACE exams two days before I was due to sit my first exam. I made that decision for me, the exams were putting a lot of pressure on me mentally and I could feel myself slipping back into old habits, so I made that decision based on what was best for me. Sure, quite a few people couldn't understand why I had put in all that work all year only to pull the pin last minute and have nothing to show for it. But in all honesty I would much rather have no ATAR score than be back to square one in regards to my mental health.

I got this close to Harry freaking Styles. (see the picture at the side, I was ecstatic trust me.)

I got two tattoos. I've always been obsessed with tattoos, I love the way the look and I like that by having them on me I'm self expressing. My two tattoo (so far, sorry mum) are both script- as I've discussed before the first was lyrics from All Time Low's 'Therapy', and the second 'Things change' both are reminders to myself that I now have permanently.

I became closer with my family. In past years I'd been very much of a recluse, it wasn't that I didn't have an interest in knowing and being around my family, it was something in my head that said they probably didn't care. This year I made it my mission to make sure that I became closer with my family, and I did. (I'm chucking in quite a few selfies with family just because it took so long for me to get some members to actually take selfies with me!)

I saw some incredible live bands. From 5 Seconds of Summer for the third time to All Time Low and Fall Out Boy for the first. I saw Tonight Alive for the second time and The Amity Affliction for the first. I saw One Direction for the second time ever and Ed Sheeran twice in one year. I saw some local bands as well, With Confidence and Masketta Fall, Northlane (they're from Sydney okay I still classify them as 'local') and Bare Bones. 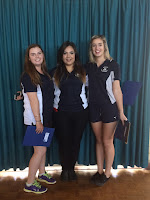 I graduated high school! Don't get me wrong I still have absolutely no clue what I'm going to do with my life but I've finished twelve years of schooling and now I've got a whole world to explore.

Thank you all for sticking with me and this blog during 2015, without you I probably would not have had the motivation to keep writing and for that I truly thank you. Happy New Year everyone, here's to 2016, lets make it great.