on March 29, 2016
Its been two months since my last post, two!! Its not that I didn't write posts in those two months, its that I began to write the posts with every intention of finishing it off and then when I would come back I would hit a big brick wall of writers block. Writers block is such a hard thing to get around because you just become unmotivated to even bother trying to write. I will write down the ideas that I come up with for blog posts (usually that spring to mind at the most inconvenient of times ie. while I'm driving along singing State Champs at the top of my lungs, when I'm about to get myself slightly drunk, when I'm trying to do my make up ect). So these idea's (the ones that I remember) go into the notes app of my phone to be elaborated on at a later date. Currently there is five ideas in my phone, do you want to know how many I've written out completely? Absolutely none. But that is the thing about writing, there is never going to be a time when you just have idea after idea after idea. Writers block hits everyone, and it seems I hit it for two months and thank goodness that there seems to be light at the end of the tunnel.Today's post is a kind of summary of what has being going on in life lately (the interesting parts of it.)

Mentally, these past two months have been very up and down. Thankfully, most of my days have been good- my mind has been at ease, the bad thoughts were for the most part kept at bay and I've been putting myself out there. These good days, I feel, should be credited to the people that I surround myself with, both family and friends. It takes a while but once you come to the realisation of who is good for you and who is not, its easy to have better days. The people who are good for you will make you realise that you want every day to be good, you want to be happy and you want to be present. Sure, even with the right people around you, you are most likely going to have bad days. My bad days, I've concluded, come from my mind, I create my own bad days. I still get anxiety over day-to-day things like talking to people about myself and making phone calls- and on the days that the anxiety prevents me from doing this, the whole d
ay just becomes a bad day. I will try to change it around and turn it into a positive day, but its like my mind id now focused on the fact that I couldn't make that important phone call, or that I had to drive an hour away to a chemist where no one knows me because I didn't want to go to the chemist at home and risk having to serve the person who assists me at work. My bad days, and quite a few disagreements also stem from being paranoia and over-thinking. Something will work its way into my brain and stick in there until I've analysed and over-analysed it to the point where I usually take a nap to avoid thinking about it, even for a little while. I think lately, everyone has been noticing my overthinking. I will ask someone something a few times just to make sure that they are sure of what they're saying, I will space out and sit there for minutes on end with the thoughts just swirling in my mind continuously. I've also been a lot more emotional lately. I will cry over a TV show one night and the next be in tears because I said something wrong. I would love to blame this on my period, but unfortunately my period does not last the whole month and therefor can not be blamed for the amount of times I have shed tears of the silliest things lately. 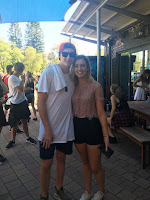 I've done some pretty exciting things in my time away from The Introvert Archive. I got two new tattoos- the first a cat (yes, a cat, so sue me) on the inside of my ankle. The second a mandala on the very top, side of my thigh. Everyone, I mean everyone told me that the mandala wasn't going to hurt based on the location, but do you see how much line work is in that tattoo!! I'm not going to lie it was such a struggle to stay still for this one, especially when both of my legs began to go to sleep! (Shout out to my pal Amy for the snapchats of my pain while I was getting this tattoo, also for providing moral support). In more exciting news, I saw State Champs live, and got to meet/get a photo with Derek!! This day also came with a speeding fine (I do not condone speeding kids, do the right thing, no one sue me please.) but it was kind of cancelled out by the fact that I was so happy that day. More exciting again was that after a few weeks of nagging my boyfriend finally caved and took me to the zoo!! I pretty much dragged him around the whole zoo and we got to see all the animals- many of which I now want as pets, so much so that I would not even think twice about investing in a zoo, simply because imagine getting to see all the pretty animals all day,

everyday! Continuing on with good days- a good day was when my Mum and I went to see Em Rusciano Is Not A Diva, a comedy act presented obviously, by Em Rusciano. I mean, she's probably more targeted at women, but everyone should definitely check out one of her shows, it is bound to turn any bad day into a good day.

Usually, when I come back to this blog after a period away I try to set myself out a schedule- I will tell you that I will post twice a week or something like that, thinking that it will put pressure on me to write. This time, I'm not going to to do that, I'm going to write when I want to, when I'm inspired and motivated, because I love writing and I love this blog and I don't want it to become a chore to me, I want to keep writing and write for fun, for writing to make me happy.

So, until next time, whenever that may be, stay lovely x
lifestyle