How You Ruined International Men's Day With Your Gender Roles

on November 20, 2017
Yesterday, Sunday the 19th of November was International Men's Day, which I will admit I was not aware of until I logged into my Twitter account and the first tweet that popped up on my timeline was the following: 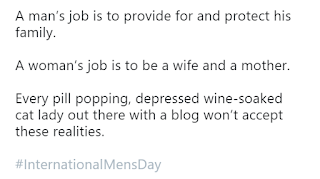 As you an imagine, being one of the "pill popping, depressed wine-soaked cat lady out there with a blog" (give or take a few descriptive words) and being the overly opinionated person that I so clearly am, I have an opinion about this.
First of all get fucked. (please excuse the language in this post, but I am bloody mad about this and it is my blog so I will swear if I want too.)
Second of all, someone should have told me we were STILL living by these ridiculous gender roles that I thought we had moved passed, you know being in the 21st century and all.

Just to be clear here though, these days are here to celebrate being a man or a women (or whatever you identify as) and not to bash and slam the opposite gender. A lot of what I read on the hashtag for the day was people (men and women) celebrating males and there was a lot of bringing awareness to the struggles that men face. Something that was brought up often was being told to "handle it like a man" one of the most damaging phrases in my opinion. It was so great to see people using the day and the hashtag for the right reasons like bringing awareness to men suicide rates and violence among men.
What doesn't sit right with me, is some of the absolute bullshit I read in the #InternationalMensDay hashtag, that was posted not to empower men, but to slam women.
Some examples:

oh, and can't forget this one:

I didn't realise in this day and age, in fucking 2017 we still had to live by the gender roles of previous years? Oh, that's right, we don't.

I want to publicly say right now: there is not rule book that states that the men have to go out and work, to be the soul providers while the women stay home with the children and have dinner waiting on the table when they get home. FUCK THAT.

I mean if that is how you choose to have your life play out, great, more power too you. But you can be damned sure that there are women in this society who won't put up with that. We, as women are allowed to want careers and to be successful and to not want to follow the guidelines of these gender roles. What the hell is wrong with a man wanting to stay at home being a father?

Why the hell are we still expected to live by these gender roles?

As for the "men and women are not equal" do you know what? You're bloody right. We still aren't equal, but we damn well should be.
Men are still paid more than women for doing the exact same job,  is that equality?
Some sports are still "men's sports" and others are viewed as "women's sports", is that equality?

Everyone, not dependent on gender, or on race, or age or any factor, EVERYONE, should have the same opportunities as each other, we should be allowed to pave out own futures and not be frowned upon for not following the guidelines of the expected gender roles.