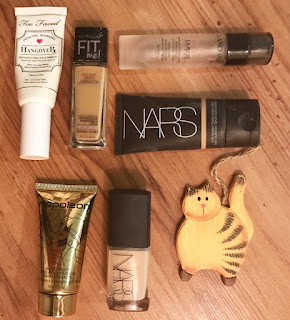 Sometimes, the idea of trying out a new primer and foundation gives me the shivers. The idea of putting it on my skin only to end up a red, itchy mess in the next half an hour makes me NERVOUS. More often than not I will never try new products on a social outing, and will try them only when I'm heading into work and can make a made dash back home to get it off my face immediately if need be. Ive tried many make up products, from drugstore to high end and I have compiled a few of my favourites into one post for any sensitive skin gals and guys who are struggling.

Alright, lets start with primer because obviously that goes on before your foundation.

My absolutely favourite primer (I am currently waiting for my fourth bottle to arrive in the mail) is a little bit pricey for a primer, but the fact that it doesn't make me breakout in a rash in invaluable. For $60 from Mecca Maxima I purchase the Lancome Base Pro Primer. This is an oil free, silicone feeling primer that leaves you with a beautiful canvas to work with. It does take a few minutes to dry enough for you to put your foundation on but it isn't like you can't do more with your time while waiting those few minutes. Due to the primer being oil free it doesn't leave you with an oily complexion, instead it give you the matte look, which is a look that I really go for with my complexion.  I do find that when I wear this primer my whole face stays put for a lot longer than when I don't wear it, which is obviously also a bonus. The silicon like ingredient in this primer is cyclopentasiloxane (don't ask me how to say that one) this just makes it a dream to spread on your face, and it is also known for giving your face more of a plump look, who doesn't like to have a plump face (even if it is just an illusion.)

My next primer for you is the Hangover Primer from Too Faced, I also buy mine at Mecca Maxima for $46. Yes, I do spend a bit of money there, is that a problem? Unlike the Lancome primer I just talked about this one is more like a moisturiser when you put it on your face. I love to use this when I have an especially dry face in time like the colder months. I have seen a lot of mixed reviews about this one, I'll be honest. It doesn't give me that glowing look it should achieve but it leaves my face feeling hydrated and healthy. This one ends up being slightly tacky on the face, which I love because it feels like its holding your foundation on that little bit extra. It does have a faint smell of coconut too it, which the first time I wore it made me feel uneasy about the reaction my skin could have had, but to my surprise there was nothing in the way of a reaction.  This primer also has probiotics in it, which is also a very good thing for sensitive skin.

The last primer I have for you is the Napoleon Perdis Auto Pilot Pre-Foundation Primer, and I but mine from Adore Beauty for $59. This one has some similar properties to the above primer. Its moisturising and a little bit goes a long way with this product. This primer leaves me feeling hydrated and my skin healthy pre-putting my foundation on. This primer also comes with some incredible styling power, when you put it on it doesn't feel more than a moisturiser, but after a few hours you can see that your foundation isn't going to budge for a while and still looks as fresh as when you put it on. The second listed ingredient (next to aqua) is sopropyl palmitate which is derived from coconut oil an acts as the moisturising ingredient.

And now to the foundation.

The first foundation I want to tell you about is a drugstore foundation, because more expensive doesn't always mean better. On the days when I am not keen on a matte face, I go with the Maybelline Fit Me for a glory and smooth look. I buy mine from Priceline for a mere $19.95. This is such a blendable foundation, I love using it when I am fake tanned. Obviously I try not to fake tan my face so I have a white af face and a brown af body, so my foundation needs to blend like an absolute dream. It isn't full FULL coverage, its medium coverage, but it can also be built up without being cakey. This makes your base look very natural, HOWEVER what foundation in 2018 doesn't have a pump- actually there is two in this post.

The next foundation sans pump is the Nars Sheer Glow Foundation, which I buy, also from Mecca Maxima for $68, which is a hell of a big price difference from the $19.95 above. This foundation leaves you with a glowing complexion, however the staying power could be better, but that is what primer and setting spray is for, isn't it? This foundation is good for hot days, its light weight and doesn't leave you with that horrible heavy and cakey feeling that some foundations do. You can get a bit of streakiness but that isn't hard to buff out. I use this when I am at my palest because the shade range is that good that it actually goes down to white as a ghost. 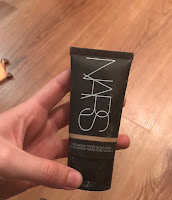 My last foundations, isn't a foundation at all and it is again, by Nars. Even though it isn't a foundation, it is buildable and it perfect for the hot days we are currently experiencing. It is the Nars Pure Radiant Tinted Moisturiser and shock horror I buy mine from Mecca Maxima for $66, so it isn't any cheaper than a foundation really. I still use primer with this even though it is a moisturiser just because the "tinted" part makes me feel like a primer is necessary. Many people say that it is easier to apply with your fingers but I have an actual hatred of using my fingers for anything related to makeup, so a brush it is. This is perfect for day to day wear because it is so light coverage and its easy to go about your daily tasks without having the feeling of having a face decorated with cream cheese icing.

And there we have another chapter of the sensitive skin chronicles, hope you enjoyed x