Are Country Towns Still Safer Than The Cities?

on April 22, 2018
When I decided that I wanted to start writing about religion things that are happening in the world, the real issues that are going on right in front of us- I always thought I would just stick to the issues that everyone can relate too, the ones that most people can read and have an opinion on. Today, while I was wring up my weekly blog schedule I was thinking about a post that I hadn't yet written- this one. A lot of people that read this blog aren't from my little town, but I still want you too read this and understand that while I primarily talk about Wongan Hills, the point relates to a lot of smaller towns in Australia. 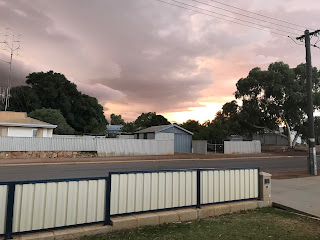 Fact or fiction: country towns are safer than the metropolitan area?

A few years ago I would straight out have said to you that I felt far safer in my little country town than in the city, today, I'm not so sure. Do I still feel as safe as I did a few years ago?

I live in the small wheatbelt town of Wongan Hills, 180 kilometres from Perth, population? Apparently around the 1200 people mark, as I said- small town. We're made up of a few shops, a few machinery dealers and the local pub (can't forget that one!). Wongan is very much a town where everyone knows and everyone- and all their business. More than likely anything you say or do could be passed around the whole town within a twenty four hour period, we all like to have a good gossip. We have a district high school, typically the further you progress, and the years you age the less people their are in your classroom, until you end up with two or three other people graduating year twelve with you. We do alright at sports, a few footy premierships, a few netball and hockey ones too. I would say that just about sums up my little town.

Living in such a small town you would assume we don't have much trouble, not a lot of crime, that sort of thing- oh, how wrong you are. Once upon a time some type of crime would occur and it would be the talk of the town for weeks- because simply that kind of stuff just didn't happen in Wongan. We would have to talk about the same incident over and over because nothing new had happened. Today, its just about every second day that someone has committed a new crime for us to all talk about, and deal with the aftermath of. From vandalism, to stealing, to assault, to arson, you name it we've probably had to deal with it in the last few months alone.

Our little town isn't as safe as it used to be, so when people assume that living in the country you can walk out the front door and leave it unlocked with no one home, or you can leave the keys in the ignition of your car while you run into the shop for some milk, you have to have a bit of a giggle at how naive they are. Once upon a time you could do those things, you could accidentally leave your home open all day at work and not kick yourself when you get home.

I think it started out as petty crimes, things that were wrong, but at the same time they weren't physically harming anyone. A little bit of theft here and there, but that was the extent of it. There was a few months there not long ago when almost every business on the main street was targeted over a few days. And following that string of incidents an elderly, local man was attacked in his own home with a crowbar and his car stolen. Since then we've had more than a few incidents of vandalism, a few more attempted break ins on local businesses and at least once case of arson.