Taxed For Having A Vagina | The Tampon Tax 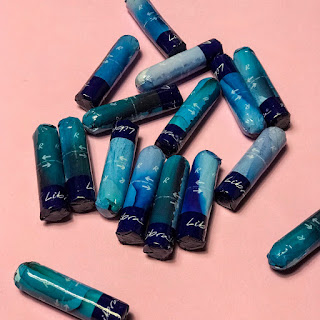 As women, we are *blessed* with a vagina and a reproductive system, we're given ovaries and the ability to produce milk and that seems to be all well and good. But then we get to your monthly, your period, "that time of the month", shark week, a visit from Aunt Flo, the red badge of courage (okay I've never actually heard anyone call it that last one, but Google assures me people actually do use it), and apparently that is something we should be taxed on, because we definitely chose to live the blood-coming-out-of-our-vagina-once-a-month life.

Much like the taxes on electronic goods or the latest Gucci purse, tampons and pads are seen as a luxury item (because shoving something inside your body to absorb blood is a luxury, don't get me wrong) instead of a necessary item for women's reproductive health. Australian women spend of $300 million dollars a year on tampons and pads, and do you know how much of that is GST? In case you couldn't do the math- $30 million. $30 million in GST on sanitary items that are a completely necessary item, unless you would prefer that women walk around with blood filled underwear and blood dripping down the insides of their pants for a week out of every month?

The GST laws were actually written in back 1999- so around nineteen years ago. In this time they were drafted by mostly male public servants, had a very male dominated cabinet- and well everything was male dominated really, wasn't it? So, collectively these guys thought- "women don't need tampons and pads, what a luxury! Slap some GST on those! But GST on viagra? Surely not!" yes, you read that one right, we pay a tax on necessary sanitary items every month, but should a guy need some help to "get it up", no tax on that! Other items that are exempt from the tax include incontinence pads, nicotine patches and sunscreen, makes complete sense doesn't it?

The Labor Party come up with a plan to abolish the tampon tax- but not loose that $30 million they were making off it. Their plan was basically to move the GST from tampons, and instead add it on to twelve natural therapies that are currently exempt from the GST, such as herbalism and naturopathy. Sounds reasonable doesn't it? Take a tax off something that every god damn women needs, and stick it on to something that less people use on an every day basis and is more of a luxury. However,  the next election is not due to be held until 2019 and the Liberal Party who are currently running the show clearly don't share the same views, despite the fact that 18 of their parliamentarians are female and are also paying this absurd tax on their visits from Aunt Flo.

The average Australian women will use around 10,000 to 12,000 disposable menstrual products in their lifetime, so I turned to the internet to do some math. One pack of regular U By Kotex tampons retails for around $9.00 for 32 tampons, so, around $0.28 per tampon. Now lets multiply that by 10,000, and that comes to $2,800.00 on bloody sanitary items. Do you know how much could be saved if the GST was abolished? $280.00, sounds like an amount that would be better off in my back pocket than in the governments for something that is an absolute necessity.

So, $2,800.00 on sanitary items in a lifetime is going to be a stretch for most normal people, let alone those who are classed as "low income". I feel that sanitary items are a basic human right to be honest and no matter how much money you have you shouldn't have to make sacrifices with your health. So maybe it is time Australia takes a leaf out of Scotland's book. The whole country of Scotland will now distribute free feminine hygiene products to women and girls who come from low income households. This was initially trialed in Arberdeen (a city of Scotland) after it was reported that girls were missing school because they couldn't afford pads and tampons. The whole country is now on board and around 18,800 women who come from low income households are going to receive free sanitary items, and free sanitary items are going to be available to young women at schools and university's.

So, Australia I think it might be time to stop taxing women for their reproductive system and start viewing femine hygiene products as an absolute necessity instead of a luxury.