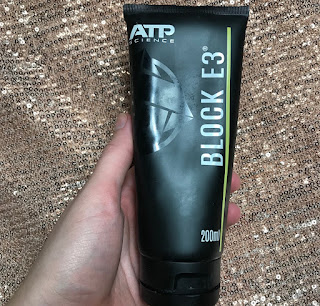 This was supposed to be one big long post about both the transdermal creams that I use from ATP Science because they work together and compliment each other. However upon the realisation that it was far too long of a post, I have decided that it would be wise to split the post into two parts: part one being on Block E3 and the second part (which I will post soon) being on Subcut.

Disclaimer: Obviously I am not pushing these supplements on to my readers, not tell you, you HAVE to buy them or whatever else. I am simply giving you some information on the product and giving you my thoughts and how it has worked for me. Just because a product has worked or not worked for me and my body in no way states that it is going to have the same result for everyone else. Clearly I am not a professional, just someone doing their own research and having their own experiences and sharing them with you. Please do your own research before deciding if the product is right for you.

Have you read the last chapter of the Supplement Diaries? No? I talked about what products I use to get me motivated in the morning pre-workout- you can read it here, if you missed it.

Alright, Block E3 lets talk about it. I was skeptical at first about a cream fat burner, surely oral fat burners would be more effect than a cream- right? Maybe not! I put in a lot of research before purchasing either this or Subcut because I was very wary about spending $80-odd on something if it wasn't going to work. So, let me give you the information that I based my decision on before I purchased these products.

What is Block E3?
As I said above, its a trans-dermal cream, which is why a lot of people are a bit skeptical of it- because it is a cream, and your first thought is 'am I paying for a fat burner or am I paying for an overpriced moisturiser?' So the three active ingredients in this product (I talk about these further down) synergistically work together to improve the appearance of those stubborn fat pockets that are the result of estrogen dominance. Basically this product is an estrogen reducing product, the ingredients, once absorbed through the skin work to inhibit the conversion of testosterone to estrogen (aromatase activity) and block the estrogen at the receptor site.

What is estrogen dominance?
Basically estrogen dominance is exactly how it sounds- there is too much estrogen happening in your body. While estrogen is a female hormone that is responsible for female characteristics such as breasts and menstruation, this dominance can also occur in men as they too produce small amounts of the hormone. There are many signs of estrogen dominance but we are going to focus on the fatty deposits and accumulated fat in certain areas, creating an estrogen dominant body shape. The estrogen can also be responsible for an increase in inter-muscular fat which results in less muscle definition, as well as reduced muscle mass and muscle fibre size.

What does estrogen dominance look like?
In men, having an increased estrogen level could result in other health problems, so not only could you be storing fat in areas you don't want to, you could also have other issues going on, if you feel this is the case please consult with your doctor.
Fatty deposits due to estrogen dominance in men tend to occur in the form of man boobs and the hips and butt, creating an estrogen dominant body shape.
In women the elevated estrogen levels can increase the subcutaneous fat on the lower abdomen, butt, hips and thighs. It also can result in cellulite.


So, what are the active ingredients in Block E3?
This product contains three active ingredients that all work together to reduce the estrogen in these fatty deposit areas. The first being Oroxylum Lndicum (Midnight Horror) which is the main ingredient for inhibiting the aromatase activity and blocking the estrogen receptors at the site. It is also an antioxidant, anti-allergic, anti-bacteria and anti-inflammatory. The second active ingredient is Fucus Vesiculosus (Bladderwack) which sounds like it is straight out of Harry Potter and The Goblet Of Fire (I think I was thinking of Gilliweed when I write that line oops haha). Also inhibiting the aromatase activity this ingredient is also responsible for inbiting those binds between oestradiol (female sex hormone) to estrogen receptors. As well as being an antioxidant, anti-allergic and anti-inflammatory, this ingredient also boasts anti-aging properties and improves the elasticity of the areas applied too. Bladderwack also inhibits glycation (damage to protein structures), is a source od iodine and helps to block estrogen. The third and final active ingredient is Piper Nigrum (Black Pepper) Essential Oil which is included to maximise the absorption of the cream through the skin.

How did Block E3 work for me?
I use this product every night after a shower, before I hop into bed and for the first few weeks I was very skeptical that anything was happening at all. HOWEVER when I used this product in conjunction with Subcut (review coming soon) I noticed that I was holding less fat in the areas I applied both creams too- which was obviously the goal. I use this cream on the fatty deposits on my inner and outer thighs, my hips and my lower abdomen and have really noticed a difference in the areas- tighter, less visible cellulite and a reduction of fat.

Where did I buy Block E3?
As per usual I purchased this product through WA store Fat Burners Only (that is a clickable link) for $69.98.

As I said above the second part to this The Supplement Diaries chapter on Subcut will be coming soon, so stay tuned!