I Thought I Was Doing It The Right Way... | Food & Fitness

on November 27, 2018
Prior warning before you read this: I'm trying my best to get this written and posted before I loose my nerve and decide that no this isn't something I can write and post- apologies if my post is all over the place. 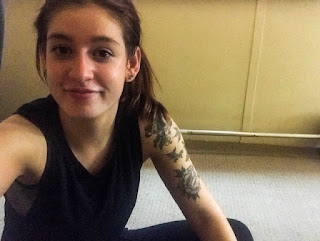 I am not sure if it was mentioned in an earlier post, I do remember a post about how I was learning to love myself and how I was "getting healthy", and I am not here to say that everything I said was bullshit.. because tit wasn't. It was what I was doing and it was the method I truly believed was going to get me to be the happiest and healthier version of myself. I now realise that my method and way of going about this was completely unhealthy and I just couldn't see it, I couldn't see that what I was doing and the behaviours that I was displaying were so unhealthy. I hit a turning point a few months ago where I gained some clarity, a clear vision that the way I have been living my life in regards to food and fitness for the past year and a bit have been so disordered and unhealthy that I couldn't see the damage I was doing to my body.

I want to tell you about some of the behaviours I was dealing with- they collectively contributed to me having an unhealthy relationship with food, and health in general.

As I said it was about a year and a bit ago, I was unhappy with how I looked, in my mind I wasn't going to be happy unless I looked like the girls on Instagram,- you know the ones that I am talking about.- the tanned, skinny, happy, healthy ones that rack up millions of followers.  I wasn't going to be happy with my body unless I had the nice legs with the thigh gap, the flat stomach and the toned arms. That was my end goal, to be someone who had the "ideal body", someone who looked like they'd just stepped out of a magazine shoot at all times. I spent so much money on workout guides that promised to get me "in shape", to have a "bikini body" and I was getting no where, sure I was getting stronger but I wasn't losing the weight I wanted to lose. So if I finished one guide and still wasn't happy, I would move on to another that had good reviews. Currently on my phone there are approximately six health and fitness guides- can we all just take a minutes to nod sadly for my bank account.

When working out alone was failing me, I decided to up the game, I thought I was eating healthily by eating "everything in moderation" but I needed to take that next step.  I downloaded an app called "Easy Diet Diary" and began logging every single thing that I ate. I was obsessed to the point that I was weighing my food to make sure I was getting the exact measurements. I cut my calories to no more than 1000 a day, do you know how much food that is? Let me tell you right now- it is not a bloody lot at all. The body needs so much food to function day to day and I was just not giving it my body.

So while I was not giving my body the food that it needed to have energy, I was also pushing myself harder than ever in terms of working out. I became obsessed with the amount of calories that I would burn during a one hour workout, if it was under a hundred, well, it wasn't good enough. If I overate the day before, the workout in the morning had to be a killer, my mind was telling me I needed to work off those extras. I started to see food as either "good" or "bad" and bad food was to be avoided at all costs, and if I did eat it, I would punish myself with exercise. I started to hate working out, I dreaded it, I didn't enjoy something that I used to fucking love. I wasn't about feeling good and strong anymore, I was about burning calories. I would also get stressed out if I wasn't able to workout on any given day, I would look for an excuse to not leave the house so I could stay home and workout. I would come home from work early to workout, it was beyond mental that I would not let myself have a break, I barely had rest days.

You all know I was doing the intermittent fasting diet, you all know because I posted about it and made it sound like I was doing the right way, the healthy way. I wasn't, I mean I was doing it the way I talked about in the post, for about the first two weeks and then I got in too deep. I was making my eating window smaller and smaller, meaning my food intake was getting smaller and smaller. I cut my meals down so, so much.
I've always been an emotional eater- you know those people who don't eat when they get stressed or anxious? That is not me, not now, not ever. However, I stopped binge eating whenever I was feeling crappy and started binge eating almost every single weekend. It would start Friday night and end on Sunday afternoon- standard. It would include lots of food that I would refuse to eat during the week, copious amounts of junk food like chips and lollies and chocolate, God the chocolate. And more often than not, it would include quite a lot of alcohol mixed with sugary mixers.

Let me tell you, its fucking difficult to change these behaviours once you realise how unhealthy you really are. It has taken me a few months to talk about this on here, probably because I was embarrassed- embarrassed that I had written posts making you think I was doing things the healthy way when I wasn't. I want to tell you now that I have deleted that app on my phone, I don't weigh my meals, I don't count my calories, I work out to get stronger and because it makes me feel good, I eat whatever I want (in moderation of course). I still look at myself in the mirror and think critically, but I'm trying to change that, I'm trying to look at myself and think "fuck yeah girl you look good" and I know one day soon I will be able to do that, but for now I will settle with striving to be healthy the right way.