on January 15, 2019
Picture this: it’s the year 2019 and women have an AFL side, much to the dismay of many, many men qho comment on the AFL Facebook page.

Oh wait.. you don’t need to picture it, because it’s real and you can see it happening in the flesh there of the AFL Facebook page.

The AFL page posted a status update about footy returning in two weeks with the first AFLW game of the season to be played, the comments that ensued were, to put it quite frankly: fucked. Full of many men who feel threatened by the fact that footy is no longer viewed as a “mans sport”, threatened by the fact that women can do things that men can do. 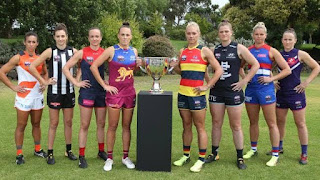 “How long until the real AFL starts?”
“Can’t wait to see three goals a game!”
“I’m planning on painting the house that weekend so I can watch the paint dry as that’s more exciting than watching aflw”
“Why can’t the women have their own app where no one will read the articles instead of wasting everyone’s time by scrolling past them. Stop forcing it on everyone. Nobody wants it’s, it’s rubbish”
“So footy isn’t really back”
“I’d rather watch grass grow! Joke of the competition”

I actually got so mad I had to stop reading. How can people say that just because the game is played by females- that it’s not “really footy”. Real footy is any football game played by any gender. Women are playing “real footy” and it’s time to acknowledge that. Women can do whatever the fuck men can do.

I grew up thinking that some things were for boys and some were for girls and you were never to cross between the two. I reached an age where I realised “fuck that- we are allowed to do whatever the hell we want”. I have the mentality that girls can wear blue and play football if they want and boys can wear pink and play netball.
We’re all the same, the only thing separating us is our genetalia.
I don’t want my sisters and any future children to grow up in a world where they’re told that just because they are female means they can’t do something.

To see people being so sexist on a public forum is a real let down if I’m being honest. I am so aware that not everyone has the same views as me, and that some people will never be on board with the whole gender equality stance- but in 2019 I didn’t think it would continue to be as prevalent as it is, and that makes me mad and a little bit sad.