on January 29, 2019
Having a smaller audience had lulled me into a false sense of security. I was certain that posting a bikini photo from my recent holiday would be met with people being positive and no one being mean, because the following I have- they’re nice, they’re positive and I have never really had a bad comment before.
I forgot that once something is on the internet EVERYONE feels as if they are automatically allowed to voice their opinion- whether they know and follow you or not.
There was only two mean comments, that were swiftly deleted and blocked but I can still remember them word for word and if you asked I could recite them for you right now. One was about the size of my thighs, the other was about my stomach. Why was I so obsessed with what these people were saying about me? I don’t know them. I am probably never going to meet them in my life. They don’t even follow me, or know anything about me or my blog- so, why was I so affected? Is it because they were my first experience with body shaming? Is it because I am self-conscious without really realising it? It is because I need the approval of everyone around me? Why!?

This was the offending photo. Posed (very awkwardly I must say) by the pool at the resort I was holidaying at. I was already a week into the holiday so I hadn’t worked out as much as I usually so and you could tell but I was in holiday mode and I was fine with it. 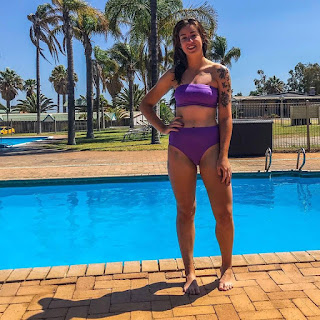 I had never really posted a photo like this before, not in a bikini- ever to this account. But I had been putting in so much effort to feel good and be confident in my own skin, that I looked at this photo after my partner had taken it and thought “hell yeah I can post that!” Note the smile on my face. Sure, I could go through and point out my flaws but I’ve stopped picking myself apart like that.

My two body shaming comments came from people I didn’t know. The first came about twenty minutes after the post went up. I knew how this worked, I was supposed to delete the comment and then block the person. I’ve heard it countless times “delete and block.” My head was chanting it at me, screaming at me to just delete it and get on with it. I didn’t.
The commenter was a lady from Australia, she had two kids and she was commenting that my thighs were “huge”. I obsessed over this comment for five minutes, I re-evaluated the image- was I wrong to have put it online? I got up and looked at my thighs in the mirror, were they really that big?
I knew that I couldn’t let this one comment from a lady I didn’t know drag me down any sort of rabbit hole, so I picked up my phone, deleted the comment, blocked the commenter and distracted myself. It was niggling me at the back of my mind, but I persisted, I would not let the opinion of one person bring me down. By this time people were commenting nice things on the photo as well, which was not a bad thing at all for my somewhat shattered self-confidence.
The second comment came two days after I had posted that image. This was from a more anonymous account, I wasn’t able to read as far into this person as I could with the previous. This comment was about my stomach and that in previous photos I must have been tensing REALLY hard and forgotten to in this photo.
Again, I blocked and deleted this person. By this point I was pretty much ready to delete the photo and make an attempt at pretending I had never posted it in the first place. Two, completely random people had managed to pick my two biggest insecurities and throw them at me. All the confidence I had worked so hard to gain, it was taking a real hit.

What did I do?

I didn’t delete the photo, instead I shifted how I was looking at this situation. I was looking at it like the opinions that other people have on my body truly matter- they don’t. What these people were saying about my body, I can’t let myself take them to heart because they aren’t about me, not really. They are about their misconceptions and their prejudices and has nothing to do with me as a person. How they view the world and other people, that is their own problem and not something that I should be offended by, even if they are taking it out on me.
I know that I am happy with not only my body, but with me in general- when it comes down to it, isn’t that what really matters?

What if I come across body shamers?

If someone takes the time out of their day to shame you for your size or your shape, know that they are not worth your time. No one should make you feel self conscious, no one should be making any comments on your body.
You cannot reason with people like that however, you can’t fight back, you can’t get them to change their mind. You must accept that this is their view and you have to leave it be. Block a comment, delete a person, leave a situation.
Don’t let the voices of another person become the opinion of yourself. Don’t let what someone tells you become what you think. You don’t have pink hair just because someone tells you that you do in the same way that you aren’t “fat” just because someone says you are.
Keep flaunting your body. You are beautiful exactly how you are. You can post photos in a bikini if you want to. Don’t let the opinions of people with warped views stop you from posting what you want, when you want.

Body shamers- I don't think they will ever go away. There will always be someone who thinks it is okay to be critical of other peoples bodies and let them know what they think. We can't do much to rid of them completely, but we can be vocal about not standing for it. Make your voice heard, make people know- body shaming is not okay.
bikini body shaming instagram real talk self confidence self love wellness