I ended the first day of November 2018 in a hospital bed with my seven year old brother in the bed beside me. It was a collision between my car and a tree that landed us there. 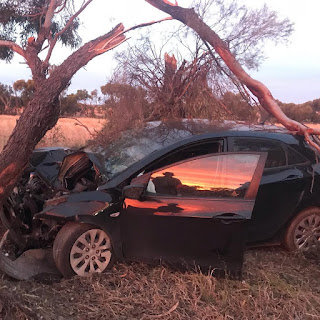 I posted the photo you see on the page to social media as kind of a "hey this is what happened give me some time to process" photo. That was the only thing I think I've said about the whole accident on social media, apart from a few comments about whiplash in regard to my training, but that is about it. The reason for that was that I wanted to fully process and let myself heal from that accident before I wrote anything about it.

Physically, both Harry and I healed fine from the accident, I think it took there days for his face to not be bruised and swollen and he was walking on his fractured pelvis within three weeks- that kid has the speediest recovery rate from seriously anything ever. Mentally, Harry seemed to be fine, I don't think he remembered much and only ever brought up the accident when he wanted something (he still does, usually when he wants something full of sugar I'll get something along the lines of "remember when we crashed into a tree"- because when you're seven, rolls ups are very important and if you have to use a bit of guilt to get them- you gotta do what you gotta do, right?

For me, the mental side was a lot harder for me to deal with- surprised? Which is why it has taken me a good few months to be able to write this post. Below you will find a eight of the lessons I learnt from that accident.

·      You should just run over that branch in the road instead of trying to go around it.
That was what landed us in the mess, a branch in the road that I looked at and thought to myself “I don’t have want to make an insurance claim” so I decided to go around. The branch wasn’t that big, but I was sure it would have damaged my car- in hindsight I should have gone with the small insurance claim over the full on write off claim I had to do instead.

·      There is a reason they tell you to put your shopping and the like in the boot of the car. When we hit the tree it sent pizza that was for dinner and my brothers McDonalds flying through the car, all over both of us. I spent quite a while covered in McDonalds milkshake and cheeseburger. We’d also just picked up two four litre paint tins- thankfully we had put them in the back, but could you image them flying through the car?

·      A car accident will restore your faith in humanity. We crashed about four kilometres out of our town in Wheatbelt WA- but however many people who don’t have in our town, we still managed to get three cars pull up and help us out. I don’t know who they are but I hope they all know that I am eternally grateful that they stopped to help.

·      When I was in primary school I remember attending a talk on car and road safety- one of the main things that was said was that most accidents occur close to home, and they weren’t wrong. We had driven almost an hour from another town when we left the road, we were only four or five kilometres from home. I still question if I had relaxed at the thought of being nearly home.

·      Airbags are the greatest invention ever. I had never seen an airbag deployed until I woke up from hitting the tree. Had I not have been as worried about my brother and as in shock as I was, I may have stopped to have a better look. Had my brother have been sitting in the back seat of the car he wouldn’t have had an air bag and he would have collided with the front seat. While it was illegal I am thankful I let him sit in the front seat that day- he came away with a bruised face from that air bag that lasted less than a few days and a fractured pelvis from the seatbelt- two injuries from the two things that also saved his life.

·      Small town gossip gets worse when you crash your car. I heard so many good ones in the space of perhaps a few days post accident. My favourites included
o  “She had stolen plates.”- I wouldn’t even know how to take someone’s number plates off their car and put them on my own.
o  “She was on her phone.” my brother was actually on my phone to our sister at the time that we crashed which alerted her to the fact that something was wrong. Also who is on their phone with a seven year old in the car?
o  “The car was stolen.” I had been driving that car around the town for over two years- not entirely sure who started this one.

·      While the gossip gets worse, it does bring people out of the woodwork who want to check that you are okay. I don’t think my phone has seen that many messages since my high school group chat. People I hadn’t talked to in years were messaging me to make sure we were okay- I mean that was the first and last I heard from them but the thought counts right?

·      You can’t just get over a car crash. When it happened everyone was sure I was going to be sent back into a spiral of depression and anxiety. I managed to keep the depression away, but the anxiety still gets to me, even now. I try not to drive unless its necessary, not because I am too scared to, but because I don’t like that I have the opportunity to think when I am driving. More often than not my mind will revert to that day. While travelling home the other day I saw a branch of similar size in the road, a completely different road, but it made me panic. I had to pull over for a while to calm myself down, all I could see was a replay happening in my mind and I couldn’t deal with it.

·      You have to conquer your fear and get back behind the wheel. I had to drive myself and my sisters home from the hospital the night after while my Mum remained with my brother. Had I not have had to drive, I probably wouldn’t have driven again for a lot longer and made it a lot worse the next time I got behind the wheel. Granted I drove the two hour drive home with my hands shaking and not going over 90 kilomoteres the whole time- it was still good that I was forced to get back in the car.

I’ll probably still replay that day over in my head every time I get in the car for a while to come and still spend too much time over analysing my actions on that day. I can’t take it back but I can learn from it and I can be forever grateful that both my brother and I came out of that relatively unscathed and unharmed.

A lot of people roll their eyes about the education of road safety and road awareness but its vitally important and something we all need to be reminded of.

Don't forget you can sign up to our weekly newsletter right here to get exclusive content right there in your inbox every Tuesday!