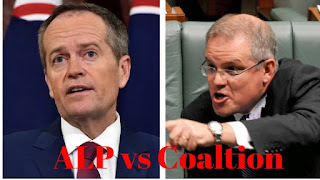 On Saturday all Australians are expected to cast their vote and have their say on which political party we want to be our governing body. This vote will ultimately decide how we as Australian will live our lives for the next four years- so isn't it in your best interest to be informed about who you will be casting your vote for?

I did some research and found some of the key points that you need to know about before you decide which vote to put your number 1 in.

I have looked at a few key areas in which promises have been made, particularly in areas that will concern the people that read this blog. The areas I have looked at below are families, education, workers, health, tax, climate change and the environment and foreign affairs.

There have been more promises made, there will likely be more made in the last minute lead up to d-day on Saturday. Cast your vote well, educate yourself on who you are voting for, vote for a government that you truly believe will serve the people of Australia well.

Don't forget to sign up to the TIA newsletter right here to make sure that you don't miss out on exclusive content sent right to your inbox every Tuesday.
alp australia bill shorten coaltion election day government politics scott morrison