Stop Slut-Shaming Women For Being Confident 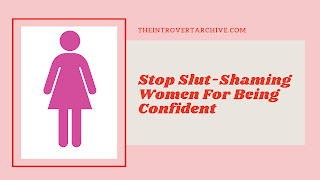 Do you want your girls and their girls to be continuously dragged and berated for what they choose to wear, how they express their sexuality, for being confident?

The Bachelor is notorious for creating drama and grabbing all the headlines and this season was no different. This year, however, I am not that interested in the actual bachelor Matt Agnew or the women who won his heart _______. Nope, this year I'm here because of slut-shaming.

Slut-shaming is defined as "the action or fact of stigmatizing a woman for engaging in behaviour judged to be promiscuous or sexually provocative." Notice how the definition says "woman" and not "person"? That would be because slut-shaming is to call out women on behaviour that any man would be congratulated for.

Thanks to the world of social media, slut-shaming has become some peoples favourite past time. I challenge you to find any female over the age of sixteen who hasn't been called the word "slut", "hoe" or "whore". Challange not accepted? Funny that.

Abbie Chatfield, 23 years old, Queensland girl, runner-up on The Bachelor 2019 and target for slut-shamers. So, what made her a target? The fact that she is a woman who is comfortable with her sexuality, a woman who is confident within herself. Why the fuck does that mean she should be slut-shamed? More women should be like Abbie, I wish I was more like Abbie.

Thousands of people who watched this season of the Bachelor, and probably even some who didn't have come for this women with knives and pitchforks just for being a confident, for being open with her sexuality, for being honest.

Why is Abbie and all women not allowed to kiss the man she is interested in and has been seeing for weeks without comments like "is she really that easy?"  Yet, the man who was equally involved in the kiss would have been given a pat on the back and a high five by his mates.

Why can a woman such as Abbie not wear an incredible outfit that accentuates her curves, that she feels confident in, that she looks bloody incredible in without degrading comments being made? Why can't we just let women wear what they want, the clothes that make them feel sexy and confident- have you forgotten that we dress for ourselves and no one else?

Stop telling women, stop telling girls that they are not allowed to be honest about how they feel, to be open about their sexuality. Let girls see that they can dress in clothes that make them feel comfortable. Let girls see that women are equals with men- that what they can do, we can do too, that there isn't one set of rules for men and for women. If we change how we act now our future generations are going to be the ones to experience that change. We can make the little girls of now and of the future know that they ARE allowed to be everything that Abbie is, that she is someone who we all should be. To let them know that fuck what other people think- be who you want to be.