Storytime: Yes, You Can Overdose on Vitamin C. 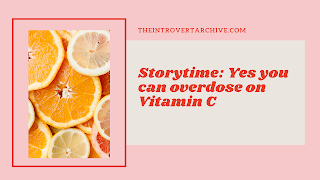 My last few posts have been on some pretty serious topics- mental health, body shaming, slut-shaming, activewear (a very important topic here at TIA.) So I thought we were overdue for more of a light-hearted one. I have never, ever done a dedicated storytime post but I love reading other peoples and watching storytimes on YouTube- so here we are. I could rant on and on about the serious topics that affect the lives of women every day, but every now and again we need a breather and the opportunity to laugh at someone elses expense- today that expense is all mine.

We all know we can overdose on things such as you know, MDMA, painkillers, even water, but how often do you hear someone overdosing on Vitamin C? Almost never right? Because it is a pretty hard thing to do. You cannot overdose on Vitamin C through say, eating too many oranges, you can only overdose through the use of supplements. Let me tell you, there is a point where there is such a thing as "too much vitamin C."

Let me set the scene for you: I was freshly eighteen, not too many weeks away from finishing my final year of school and I was "messing" around with a guy who turned out to be a dickhead. When I say "turned out" to be I mean he was one from the start and everyone else except me was able to see that.
Anyway- there are two sides to me, the one who likes to be logical and sensible and then there is the side of me who will dream about something and wake up convinced that it's 100% true. Which is what happened. One night I dreamt that I was with child. Instead of waking up and evaluating the situation I sent myself into a panic over something that could have easily been proven wrong. A few reasons I was overreacting:
a. I was on the pill and had been for years before this.
b. My period was on time, and normal.
c. there was legitimately nothing to scream "pregnancy" other than this dream.

Here is how this story should have gone: I should have evaluated the situation and recognised that I probably wasn't pregnant due to the above. I should have also put my mind at ease by purchasing a pregnancy test and confirming that I was not reproducing another arsehole.

None of this happened.

Instead, I consulted Dr Google. I could have talked to my mother who has birthed six children and would have a fair idea of what to do. I could have sought reassurance that I was not pregnant from my cousins/friends. But no, I went to Google. The web sites that came up on the first few pages of results were not what I was after, I didn't want to be told to take a pregnancy test, or to see a doctor. I want to know how to handle this right now.

Somewhere deep in the web I found a site that looking back now I should have clicked out of immediately. I would describe it as "witchcraft" and 100% not medically accurate. Anyway among other ideas such as hitting myself in the stomach with a heavy object and standing on my head for a long time, was to take high doses of vitamin c. It will prevent pregnancy and terminate any signs of life about to start growing in my stomach the site told me. I was sold.

I purchased this chewable vitamin C supplements that tell you they taste like orange but actually taste disgusting and only very faintly resemble to taste of an orange. I forced myself to take one every half an hour, which, by the way, is WAY over the recommended dosage for any given person. I did this for two days- TWO DAYS, when this whole thing could have been over in ten minutes had I have just taken a test.

Should I have gone to a doctor? Yes. Should I have told someone what was going on? Yes. Did I? Absolutely not. I went to bed and hoped it would be better in the morning.

The lesson of this story: buy a fucking pregnancy test.