The Bachelor.. For Anti-Depressants

on October 02, 2019
In an effort to reduce the stigma around ant-depressants and around mental illness, in general, I have decided I am going to pen a few different articles about the experiences I have been having. You have all read about my depression and my anxiety, but one thing I didn't really want to share was my experience with anti-depressants. I am not sure why I felt off about sharing this, I mean was I worried about what other people thought? Because I don't care any other time. Was I worried that people would think I was taking the easy way out? I know that I have worked hard over the past few years on my mental health and anti-depressants are not a "cop out" by any means, but for me, it was a last resort. This is the first of a few different topics surrounding ant-depressants I will be talking about, keep an eye out for more in the coming weeks. 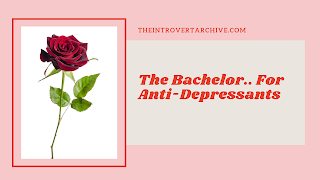 Funny headline hey? You're probably thinking something along the lines of "what the actual fuck?" and normally I would too look at a headline like that and think the same. Allow me to explain.

When I first began the conversation with my doctor about anti-depressants I was very hesitant, would they work for me? Did I really need them? How would I feel? Honestly, I was also a little bit scared of losing my mental illness, it had been apart of me since I was 15, would I even know how to operate without that looming over me? I was terrified.

My doctor calmed my nerves very slightly be explaining everything to me in detail and warning me to stay away from Dr Google (that did the complete opposite and I instead went home and Googled everything.) One thing the doctor did tell me was that it was a trial and error process in finding the medication that would work for me. One medication would work for one person, while it would probably not work for me, it was going to take a few go's to find "the one." Now you see where the Bachie reference comes in- right?

At the time I was going through some disordered eating and some issues with how I was perceiving my body, obsessed with exercise and every little bite that was going in my mouth. He knew about this and was supporting my attempts to overcome this hurdle, however, something that was still playing on my mind was the fact that I may gain weight from these medications. Because of this one worry I have prescribed a medication that he guaranteed me would be very unlikely to make me gain weight, I was happy with that.

I went and got my prescription from a chemist that was nowhere near where I live, where I was very sure that no one would know me and I could skate under the radar. I went home and sat with my boyfriend as I Googled every aspect of this medication, online forums of users, medical diaries, you name it I probably read it, and in turn, I read it all out to him. The first week of taking the tablets I began on a lower dosage which left me feeling no different which fuelled my "you don't even need these" attitude. After the first seven days, it was time to up the dosage and that's when it all began.

At the time I was dealing with some heavy shit- there really is no other way to put it. I was trying to be a support for multiple people while dealing with my own feelings and also dealing with what was going on with my body.

The first thing I noticed was nausea, God, I have never been nauseous for days on end, but this, this was relentless. If this is what pregnancy is like do not sign me up. You know when you're drunk and you skull a shit load of water and then sit there feeling like you may throw up at ant second, yeah, that was me 24/7. When I was walking, when I was working, when I was working out, when I was laying, I was nauseous ALL. THE. TIME.

At first, I didn't think this next sign was all that much to do with the medication, it was my doctor that put two and two together. My mouth became so dry, like Sahara Desert dry. And it was like this for most of the day, which made it very uncomfortable to do many things: eat, train, talk, everything. I even found myself drinking the water from the showerhead, while showering- that's a sign of the dryness.

Probably the biggest reason I knew I was on the wrong medication and this one was in fact, not my "the one" was that I was sleeping for more hours of the day than I was awake. I remember one day I called in sick after my morning walk, went back to sleep until lunchtime, moved to the couch and went back to sleep on the couch until six o'clock at night when Brodie got home from work. Most days I wouldn't get to work until lunchtime because I would sleep through my alarms, other days I would make it to work on time only to fall asleep on the couch at lunchtime and miss the remainder of the day.

I have never really been a person who had to constantly be moving, I was always pretty calm in that sense, I could lie still for hours on end. It was Brodie who noticed it first, that I could not be sitting still entirely, something always had to be moving. Whether it was jiggling my arm at my side, or rotating my ankle on the end of my foot, or tapping one leg against the other, I could not sit still for the life of me.

My eating habits were also pretty affected, I had gone from disordered eating of being obsessed with food and binge eating, to the sight of food makes me want to gag some hours and others it was like I was starving and hadn't eaten for a few days. This really messed with my mind, I would favour the days I didn't want to eat and get mad at myself for the days that I would eat everything in sight.

When I went back to the doctor after a month and reported on what was going on, I was changed to a different medication, apparently, it is not normal to sleep for that many hours a day? Astounding.

This medication I am on currently, it won the whole season, it got a rose at every ceremony, it walked away with The Bachie. Thank goodness because if I had of had to try a few more to get through to the winner I may have given up in the process.

So, this was my experience of what it was like to be on a medication that did not work for me, this experience was unique to me. It probably won't happen to you. Remember that. Trust your doctor and trust your intuition.
anxiety depression medication mental health