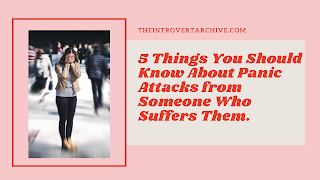 I forgot the feeling of your heart pounding so hard you feel like at any second it is going to launch out of your heart and run away.
I forgot the feeling of everything in your stomach about to come up like I'd just eaten Mexican- I know its bad for me, but I eat it anyway and then walk around feeling heavy as if it's going to come up at any given moment.
I forgot that every single sound around you multiplies by a million, and then you add on top an unbearable ringing in your ears that you cannot drown out.
I forgot that you begin dripping sweat from every part of the body that you can sweat from.
I forgot how hard it is to calm yourself down no matter how hard you try, I forgot how to overcome an anxiety attack.

One in 13 people in the world suffers from panic attacks- so more often than not you will know someone who is dealing with panic attacks- if you know me, then hey I'll be your token anxiety-ridden friend.

2. You don't get any warning when you're about to have a panic attack. There is no warning system in place, no alarm bells that ring to alert you to the fact that you are about to feel as if you have lost complete control. You need to find your coping mechanisms that work- you need to be prepared to calm yourself down at all times. (Yeah I fucked up on that one, got a little to comfortable.)

3. Panic attacks are fucking exhausting. Imagine being in the hyper-sensitive state for a long period of time.. because that is exactly what is happening. I always take some time out after a panic attack, I am no stranger to a quick nap after, a luxury many people are not afforded. Some people have to pretend that nothing is wrong to go straight back to the office and sit there ignoring their utter exhaustion.

4. They can happen when you're asleep. Some of my worst panic attacks are those that have started during my sleep and resulted in me waking up more terrified than usual, because of that sudden startling awakening. These are referred to as "nocturnal panic attacks" and the leave you fatigued during the day, which in turn may cause more anxiety.

5. Avoidance doesn't work.. ever. Believe me, on this one, you can ignore your panic and anxiety all you want but it will build up and you will explode. Don't ignore what is causing you to feel this way, work through it. Easier said than done, yes I know.

Do you suffer panic attacks and anxiety? Is there something else you want people to know about what you're dealing with?
anxiety depression mental health