on December 13, 2019
We are reaching not only the end of another year but also of another decade, yes the 2010s are also over. Is it just me or did this year seem to fly by faster than a racecar on the final lap? While I was thinking about what has happened this past year I was also thinking, what the hell has happened in the past ten years? What feels like a lifetime ago but was only a couple of years ago? So I did some research, a fun kind of research today, which for the most part I spent thinking "Jesus, I thought that was ages ago!!!".

Here is a small collection of moments that have happened during the 2010s that you probably forgot about. 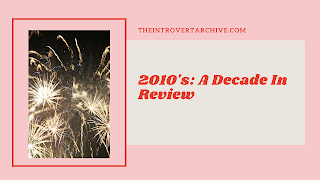 June 2010: Julia Gillard stabbed Kevin Rudd in the back.
I truly wonder if K-Rudd saw this one coming or he was simply blind-sided. Julia Gillard took over to become the 27th Prime Minister of Australia and our first PM without a penis.

April 2011: Wills and Kate got married.
While everyone will be familiar with the Royal wedding of Prince Harry and Meghan Markle from last year, it was during April of 2011 that the real OG Royal Wedding of the decade took place.

May 2011: Osama Bin Laden killed.
On the 2nd of May the president of American, Barack Obama announced that Osama Bin Laden, the mastermind behind the September 11 attacks had been killed in a special forces operation.

July 2012: Gangnam Style happened.
Looking back now I cannot help but think about how damn ridiculous that song and dance duo was, was that even dancing? Still, every man and his dog was jumping up and down to the song, the bloody thing was everywhere.

December 2012: World was supposed to end, didn't.
Everyone was convinced that come 21st December 2012 we were all doomed, the world as we knew it would be completely and utterly over. Alas, everyone was wrong and now some years later we are still here.

December 2012: Plain packaging on tobacco products introduced.
From the 1st of the month, all cigarette packaging in Australia was changed to olive green in colour and displayed graphic health warnings in a desperate attempt to turn people away from the killer habit.

June 2013: Another leadership spill.
26th of June saw Kevin Rudd turn around and give Julia Gillard a taste of her own medicine. This leadership spill resulted in K-Rudd back in power.

August 2013: Dr. Patrick Reid killed.
It was a sad, sad day when the producers of Offspring thought it was a brilliant idea to kill off the love of Nina's life, the father of her unborn child. Many, many tears were shed when Patrick was confirmed dead after a walk-in with a car leaving a heavily pregnant Nina to pick up the pieces left behind. I am getting teary thinking about it, we must move on.

September 2013: Australia loses its mind, votes in Tony Abbott.
Look, I'm not saying this was the dumbest idea ever had but it is right up there. That's all I have to say on the matter, except that he is still a bit of a dickhead.

October 2013: ACT becomes the first state or territory to legalise same-sex marriage.
From the 22nd of October, The Marriage Equality Act 2013 come into force and couples of the same sex were from then on permitted to marry (like they should be!!!).

March 2014: Malaysia Airlines flight disappeared.
It was perhaps the biggest aviation mystery of the decade. The unexplained disappearance of Malaysian Airlines flight MH370 carrying ten flight attendants, two pilots, and 227 passengers. The exact whereabouts of the plane still remains a mystery, as does the exact circumstances that sealed the fate of all involved.

June 2015: Same-sex marriage became legal in all states of the US.
June 26, 2015, a day that the fight against homophobia and in aid of equality really turned an international corner. The US Supreme Court ruled that a man may marry a man and women may marry a woman, it was a landmark day for all LGBTQ+ Americans.

September 2015: Australia has yet another Prime Minister.
A party room spill sees Tony Abbott ousted as Aussie PM and replaced by Malcolm Turnbull.

May 2016: Arnott makes a massive mistake in regards to Shapes.
Remember when Arnotts tried to change the recipe on all their Shapes flavours and then quickly realised they had massively fucked up?

August 2016: Australian Government didn't realise that a mass amount of traffic to a site will crash said site.
The government tried a new thing in 2016 where they tried to become a modern government and conduct the Census online. This failed when the site was abruptly crashed.

September 2016: Richie Strahan too fucked up in his season of Bachie.
The hearts of Australia collectively broke and also sung the words "what the fuck" when Richie chose Alex Nation over Nikki Gogan. What an idiot.

October 2017: The beginning of the #MeToo Movement.
It was Hollywood producer Harvey Weinstein and the countless allegations of sexual abuse against him that began the #MeToo movement in 2017. Millions of women around the world began to bravely share their stories of sexual abuse and created a historic feminist movement.

December 2017: Australia legalises same sex marriage.
As a country, Australia finally entered the modern age and legalised the marriage of same-sex marriage after a postal vote.

June 2018: Saudi Arabian women given the right to drive.
Another win for women where it shouldn't have to be. In June the ban that prevented women from getting behind the wheel of a car in Saudi Arabia was lifted and women put one step forward towards equality.

August 2018: Another white, old, male becomes our new PM.
Ahh, Australia, the country that changes its Prime Ministers almost as much as it changes its knickers. In August Malcolm Turnbull was dumped as PM and replaced by the one and only ScoMo.

October 2018: The Honey Badger gets given a handful of beautiful women on a platter, chooses no on.
Imagine going on a dating show just to get to the final two and decide that you weren't ready to be in a relationship. I mean, I just feel like if you are going to go on a dating show such as the Bachelor you would be ready to be in a relationship. As it turns out, all contestants were much better off without Nick Cummins anyway.

July 2018: Thai cave rescue.
How was this last year already? 12 members of a junior soccer team and their coach were trapped in a flooded cave for two weeks before being rescued by expert divers.

January 2019: Women no longer taxed for having a vagina.
The 10% "tampon tax" on women's sanitary items was removed at the beginning of 2019 as it should be.

May 2019: Bill Shorten vs Scott Morrison.
Australian politics is a very popular theme on this little roundup, isn't it? In May an election was held with the results seeing ScoMo stay in the top job.

October 2019: Uluru closure.
As of the 26th of October 2019, the climbing of Uluru was no longer permitted. The Uluru-Kata Tjuta National Park Board made up of many of the traditional owners of the land enforced closure to the public after years of protesting for the closure.

November 2019 - Current: NSW on fire, politicians do very little.
At current, 2.7 million hectares of land have been burnt by the fires on the east coast of Australia. There is still hotter and drier weather yet to come, no rain forecast to offer little relief. Scott Morrison, our fantastic, great, brilliant Prime Minister who deeply cares about the Australian people on so many levels has rejected calls to provide a helping hand to the firefighters risking their lives to save others. Go figure.
2019 decade decade in review