Why I Had To Breakup With My Fitness Watch 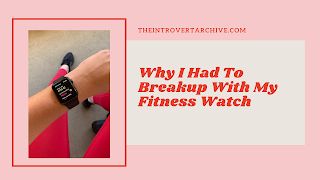 One in five Australians wear a wearable device, an Apple Watch here, a Fitbit there, maybe even a Garmin every now and again too. I fell for the craze too, man I fell hard. The satisfaction you feel when you hit 10,000 steps and are rewarded with a celebration on the screen, the anticipation of watching your rings get closer and closer together the more physical activity you did.

These fitness wearables are marketed to anyone and everyone as a great way for people to monitor how much physical activity they are actually doing and from there make positive changes in their lifestyle. For me, I became hyper-aware of how much physical activity I was doing on the daily, I was using the wearable to make changes to my lifestyle, they, however, were not positive ones.

somewhere along the way of counting how many steps I was getting in and how many calories I was burning per day, I became obsessed. Long gone were the days of aiming for 10,000 steps instead of by replaced by the need to hit as many as possible 30,000 became the new norm.

My usual one hour-long workouts transformed into two hours in the morning, six-thirty until seven. Those two hours I spent moving my body ferociously enough to burn at least 800 calories- any less and I would write that workout off as a waste of time. I would push myself to the extremes- not enough calories burnt while lifting weights? Then it was a HIIT finisher to really top it off.

My aim, every single day- day in, day out was to burn 2000 active calories. I needed that magic number to come up on the screen, I needed 2000 to show up. I was infatuated with those numbers, I was constantly looking for ways to increase the numbers, to be better than yesterday, to reach that sense of accomplishment.

I brought a treadmill for the days it was too wet or too windy outside to get my steps in for that day. I would get up at 5am every day just to be able to fit in 7,000 steps in my morning walk, followed by two hours of working out and still get to work on time. I was walking to and from work, I was walking to the post office, to the news agency, I was walking everywhere. I wasn't just taking the most direct route to and from where I was going, I was going out of my way to burning as many calories as possible.

I wore my watch from first thing in the morning until right before I went to bed. I would get a little smile every time I looked down at my watch and saw I was doing "better"  than I had thought I was doing. People were getting worried, they would tell me so- they were wondering why I was forever walking, rain, hail shine. They were worried as to why I was always saying no to going out, instead opting to get in a cardio session to make sure my calories were on track to be burnt. I would get mad at Brodie for suggesting that we drive somewhere that we could walk too. I craved the achievements.

I knew I couldn't go on anymore after I added grief to my list of things going on in my head. I wasn't coping and I knew it, everyone knew it. I went to the doctor, I had to, I forced myself too. I needed him to tell me what was wrong with me, I needed him to tell me why my body was failing me, I needed answers. I wasn't a fan of those answers- I was overdoing it, I was run down, burnout, I needed to take the time to rest. Anti-depressants, online counseling, and a break from my fitness watch were prescribed.

(Note: the antidepressants were not just prescribed because of my obsession with my fitness watch. My mental health was deteriorating for a variety of reasons and it was time to try them, to give myself a chance.)

It was hard to break up with my watch, it took every inch of me not to cave and just put it back on and remind myself to remove it before seeing the doctor. Eventually, I stopped looking at my wrist that had nothing on it, I felt lighter, I felt like I wasn't being controlled by this little wearable on my hand. Eventually, it stopped feeling like I had lost a limb, I stopped being mad at my mind for not even being able to do something simple like counting my activity levels.

The message here is, use the wearables, count your steps, whatever. But don't let them consume you, use them as a tool, not as your controller.
active apple watch fitness fitness watch workout