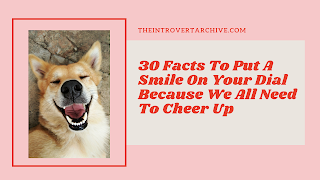 I feel like this blog and to the same extent, myself have been a little bit doom and gloom lately, sad, stuck in a rut of depression. Australia, as a whole, has also been feeling the same- a good part of our country is on fire and we feel helpless, we feel betrayed by our PM (a whole separate story that I refuse to get into while on holiday, I just can't), we are in a state of despair.

Sometimes you cannot cheer someone up indefinitely, sometimes you have to be okay with simply putting a smile on their face for a brief moment. You don't need to rack your brains thinking of small ways to put a brief smile on someone's face because I have compiled a list of random, funny, somewhat interesting facts that simply coming out within an (appropriate) moment of need could do the trick. You are welcome.

(Also a lot of these are animal-based because who doesn't smile when animals do cute things. Answer: no one.)

Got some more facts that you think would help people cheer up? Put a smile on someone's dial? Leave it below.
facts happy life smile