Being Proactive In Your Own Recovery 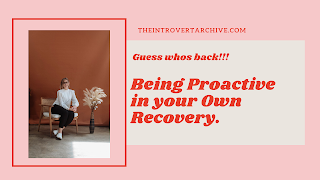 You all know what prolonged absences from TIA mean, they mean that your girl just cannot deal anymore. She is done. She is in a mental hole and has lost all upper body strength required to pull herself up the wall. That is what it means.

My last post was February 2nd and today is the 16th of March so that almost a month and a half away from writing and bloody hell have I missed it. I was so sad and depressed and the thought of writing was actually making me anxious, how bizarre, something that I love so much and see as a mental release was making me anxious.

This blog stopped being about what I cared about, what I wanted to write about and became what I thought I had to write about. And GIRL that ends now. I will not be writing about anything I don't want to write about. I will not be posting just because I "have" too. This is my outlet, my place where I get to connect with all these incredible people and have informed conversations and be happy. That is what we are going back too. We are going back to being a site for women (and men) to be informed, to be educated, to be in the know, especially about mental health. That is what The Introvert Archive is and will continue to be.

While we are on the topic of mental health, guess who went back to a psychologist... yep you guessed it, ya girl did.
So in February, it came to my attention that being tired all bloody day, taking naps on your lunch break, being snappy and annoyed all the time, never wanting to do the things you love, having absolutely no desire to have sex, having a feeling of "ick" every time you thought about food, having no energy, and having near-daily anxiety attacks, well that just isn't normal. funny that. I did what you are supposed to do, I went back to the doctor and informed him that even though I was on anti-depressants, I wasn't feeling depressed, I was feeling nothing and I wasn't keen on it.

Let me remind you that I am now on my third different lot of anti-depressant medication (in-case you missed that post it was here: The Bachelor.. For Anti-Depressants.) and because of the number of times I had switched the doctor was reluctant to try another medication. He once again very gently approached the topic of speaking to someone who was not a virtual robot on the internet- which is how I had previously been conducting this sort of therapy.

My thought process went like this:
"I don't want to talk to someone I don't know and trust." to "Okay but the tablets aren't working so I need to try something else" to "you aren't going to be honest" to "fuck this, I'll be proactive and do it."
The look of surprise on my doctors face when I agreed was one that brought a smile to my face I will tell you that.

So my first appointment. Let me tell you, living two hours from where your appointment takes place is the worst possible situation, that allowed me two hours of driving time to sit in my anxiety and let it eat at me. My stomach was physically hurting by the time I got to the offices and I was sure I was either going to have an anxiety attack the moment she opened the door or I was going to be physically sick. Both sounded incredibly embarrassing. While sitting in the car park I thought of a few excuses I could use to get me the fuck out of there, I considered coronavirus, a bout of gastro, traffic, a flat tire, believe me if you ever need an excuse for something I am your girl.

The walk-in was the hardest, my feet were dragging, my stomach was turning and my heart was about to leap out of my chest, there was sweat on my forehead and I was wondering if she was going to walk out and know exactly what I was doing. I considered running, but I never have been much of a runner.

There is something about filling out all those forms that lets them know, you know how depressed you are, how anxious you are, if you are suicidal, etc that makes you really sit there and go FUUUUUCK this has got worse. You want to be honest, but also you don't want to say something that will get you a one-way ticket to a psych ward- not that, that is where I need to be.

The session was fine, she knew the line and when not to cross it. I got emotional, but didn't cry, something I have been struggling to do since being on medication. I talked about my family, about my home life, I got nervous and tense when I talked about that because I wasn't sure if I was going to say something and have her hung up on that for the rest of the session. I struggled through the "What are three things you like about yourself?" questions, but was quietly impressed that my anxiety and depression scores were both 33- can you say consistency?

I left the session feeling as if I was on the right path as if I was being proactive in my own recovery and that made me happy- that I was doing this for myself. I booked another appointment while I was there, knowing that if I went away and was left to make one on my own it probably wouldn't happen.

Moral of this story: I had to push myself to be proactive in my own recovery. I had to take baby steps in order to see any kind of result. Sometimes you have to try things you don't want to in order to get further- and thats bloody hard to do.