6 Ways Men and Women Are Still Not Equal


I heard the statement "men and women are basically equal these days" come out of the mouth of (you guessed it) a man the other day, and my eyebrows almost lifted off my forehead. While we may have done some work in the whole gender equality department we still have a long way to go before men and women are truly equal. 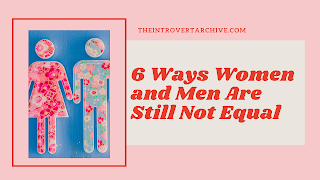 Here are six different areas that prove equality is a way off yet:
Tell me: what else are women and men not equal in? Don't be afraid to share statistics that show women in a better position than men! I am well aware there are -some- areas that women face better odds than males.
gender gender inequality life lifestyle