How Mark McGowan Handled Coronavirus & The Death of George Floyd | 5 From 5: May 2020 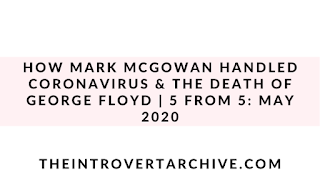 5 news stories from the past month that deserve to be talked about (in my opinion of course).

Hello, new segment!!! I'll be honest I have wanted to start this segment for the past few months and have kept pushing it back because I have been busy with work, a side business, shit mental health- you know the drill.

Basically, sometimes I see news stories and I want to write about them but I don't feel like I have enough to say, or maybe even enough time to say what I want to say- so this is where they will be talked about. A monthly recap of five news stories from the past month and just a little bit about what I have to say.

I want to open these posts up as a discussion, I want to hear your thoughts on these news stories- tell me how you feel about whats going on in the world.

I will stop dribbling now and begging with my five news stories I want to talk about from May 2020.

1. Coronavirus and how Mark McGowan has handled the pandemic in WA.


Of course, COVID had to be mentioned here, it is basically all we have lived for the past few months, it has consumed us and it deserves the mention.
Also deserving of a mention is Premier of WA- Mark McGowan.
I personally think that he has done an incredible job of leading WA through this pandemic, he didn't really have anything to go off and was kind of just left to make the decisions and hope that they were going to be what is right for the state as a whole.
I admire that he didn't bow to pressure from the other states to open up our borders- I think its a very wise idea to get things under control in our home state before allowing people to come and goals they pleased.
Another thing that he did particularly well throughout the pandemic was keeping the public informed. WA was constantly in the loop as to what was happening and when there was very little in the way of surprises and I think that really made everyone a little more comfortable and a little less fearful of the future.
In all, as we can begin to see little streams of light at the end of the tunnel, I believe that how the Mark McGowan and the WA government has handled this pandemic is to be commended.


If you missed this one China responded to Australia's push for enquiries on the pandemic by imposing 80% tariffs on barely for the next five years.
Barley is one of Australias biggest exports, with half of our market going to China, and this decision will essentially wipe out any Australia to China sales.
This news came about mid-way through seeding with most barley already having been planted- so where is this going to be sold now? Many farmers are going to feel the effects of these tariffs, they are the ones who are going to suffer. I think this is a disagreement between Canberra and China, I believe it has more to do with COVID, the enquiry into the pandemic and how hard Australia is pushing for said enquiry than is being let on. And now, our Aussie farmers, who cannot catch a fucking break are the ones who are being punished for it.

3. The death of George Floyd


I wasn't going to include this because I want to dedicate a whole post to talking about George Floyd and everything surrounding the situation, but how can I not mention it?
For eight minutes and forty-six seconds, Derek Chauvin, a white police officer from Minneapolis Police Department kept his knee firmly pressed on the neck of George Floyd, despite his plea's for let up. George Floyd was being accused of using a fake $20 bill, he was unarmed, he was handcuffed and now he is dead at the hands of four police officers. Police officers who are supposed to protect and serve their people are instead killing anyone who is not white and America, and the world is fucking sick of it.
America is currently overrun with protests, people protesting the disgusting police brutality and racism that is killing its people. As a white woman, I can never understand what it is like to be the target of racism, to be fearful of my life because of my skin colour- but I can stand beside those who are, I can stand for what is right. I believe that racism has no place in our society and the death of George Floyd needs to mark the end of this behaviour, I believe justice should be sought for George Floyd. I believe that black lives matter.


The release of Sarah Stevenson, better known by her Youtube username as Sarahs Days third activewear line with Australian fashion boutique White Fox has been overshadowed by apparent cultural appropriation.
*Again this another instance of me being a white woman and not ever being able to fully comprehend and understand the enormity of being culturally appropriated, I am coming at this as a person who wants to be an ally of people of colour. *
Last week, Sarah released the campaign for her new activewear collection on Insatgram- I believe that is where it was posted, I mean that's where I saw it before it was deleted. People were very quick to pull her up for cultural appropriation after the images showed her with two, colourful braids in her hair. All the comments ended in the campaign being pulled, a typical, tearful apology on Instagram stories and a rushed re-shoot of the campaign.
My issue here is that it was allowed to happen in the first place. That the thought of "hey this might be cultural appropriation" did not cross the mid of firstly Sarah, and secondly every single other person involved in the creation of that campaign.
It is 2020, there is no excuse for being ignorant anymore. You need to be educated, you need to be aware, you need to "woke" as they say. There is just no excuse left for it anymore, be better.

Katy Perry guest judges on Masterchef: Back To Win

I thought we would finish on a bit of a lighter note, but I have a big call to make right now: Katy Perry's episode of Masterchef 2020 HAS TO have been the best episode of Masterchef Australia ever. I don't know what I thought was going to happen when Katy Perry came into the Masterchef kitchen but it was not that. I loved every second of it.
You know how sometimes they throw in a guest judge who is just kind of idle on the side? Doesn't really say much, is not really that entertaining? Katy Perry was not that judge and I was so here for it! She made the show fun, you could tell the contestants loved her, the judges loved her, it was just such good entertainment. More fun guest judges, please.

And that is a wrap on my five news stories from May 2020 that I wanted the opportunity to discuss. As I said above this post and all five from five posts are open for discussion, I want to talk about these topics- give me your opinions, your thoughts, your feelings. All of it, give it to me.