Double Standards All Around In Bachelor In Paradise Week 1 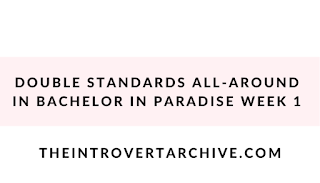 Was it just me or did the first two episodes of Bachelor in Paradise not sit well with you?

This is the second season I have committed (the term used very loosely here) to watch. The last season was last years and it was all because I wanted to know the tea with Alex Nation and Richie Strahan- I am nosy when it comes to "celebs" I follow on Instagram.. leave me alone it is a toxic trait.

I'll put it out there right now: my love for Abbie Chatfield is the reason I was like "yeah okay I will give this a go." I didn't watch her season of the Bachelor, I don't watch The Bachelorette, Love Island- none of that, Bachie in Paradise is as much reality TV as I watch. Because of that, I was really only familiar with a few cast members who I have seen about Instagram.

Abbie, I found on Instagram a very long time ago and have loved her vibes and her energy and her whole personality and values ever since. I also knew of Brittany Hockley from her podcast with Laura Byrne and Brittney Weldon from last season. Also, Tim Hanley and Ciarran Stott I was aware of like seeing them on Instagram, didn't follow them but knew who they were.

Okay, I think all that information was important to understand the context of where my opinions are coming from. I am not a die-hard fan of the Bachie franchise. Basically, I went into the first two episodes having kind-of an idea who some people were and then absolutely no idea who others were.

Now, on to the actual juicy part.. the issues that did not sit right with me during the first two episodes of BiP.

So night one, Ciarran who is very aware that Abbie has feelings for him goes and jumps in Abbie's bed. I mean, they don't come out and say this and this happened but from the night cam footage you can kind of put two and two together. On the night that the first episode aired I saw comments about Abbie being "easy", people calling her a slut, all these mean and negative comments directed towards Abbie. But there was nothing in the way of those kinds of comments towards Ciarran. It is SUCH a double standard for girls and guys. Why the fuck should Abbie be put on blast for something that Ciarran is heroed for? They're both doing the same fucking thing why is there such an imbalance? Why?

It doesn't end once you leave high school people.

I get it , it's a game show, competition type thing and everyone is "here for me" as I heard a million times... But honestly, I just do not feel the blatant slut-shaming, body shaming, and all-around bitch-iness was required from some of the ladies.
For instance, when a new girl, Jess Brody walked into paradise, Cass turned to Janey and said "She's the tattooed girl whos a stripper". Friendly reminder that Ciarran (who Cass is hoping to get a rose from at this point) is also a tattooed stripper. Why is it fine for Ciarran to be a tattooed stripper and it's not okay for Jess? Is it because you would bang Ciarran and not Jess? Is is because you feel it's okay for males to be strippers but women should not be? Do you need to get your head out of your arse?

Staying with comments from Cass it was around this same time that Cass body-shamed Jess to her fucking face. In the first few words that Cass said to Jess she exclaims "you've lost so much weight!". Like that is a fucking medal, an incredible achievement that should be talked about right then and there. She could have gone "you look great!" but no, instead she chose to talk about her weight. I just sigh every time I think about this.

Alright, I am over that, let us move on to a comment from Mary. "Ciarran is a very popular guy. Girls love him. Especially Abbie. She's claiming. She's claiming. So we're going to be all about the Abbie show again." My issues with this lie in the fact that Abbie entered paradise with Ciarran in her sights and she made that clear from the beginning and was blasted by the other contestants *Cough* Mary and Cass *cough* for this. BUUUT Mary also did the exact same thing but with Glenn. She came into paradise and was all about Glenn and got mad when he made eyes with Helena. So it's okay for Mary in this situation to be all about one guy, but when it's Abbie doing the exact same thing it's not okay? Here we go again with the double standards.

Okay, okay I think I am done ranting for this week, but there are two more episodes today and tomorrow so who knows- we may be right back here next week.

Also side opinion: Abbie was too good for BiP and deserved better. Goodbye.