COVID Returns, All About The Ladies in Masterchef Grand Final and I Don't Want A Hug Thank You | 5 From 5: July 2020 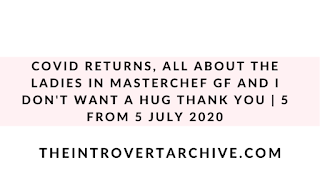 In the 5 from 5 segment I talk about five news stories from the month that I have an opinion on but feel a whole post is necessary, or there is just not enough information about the story.
Ahhh we are back! I skipped the month of June for the simple reason that I just could not find five stories that I wanted to talk about, that I felt need to be talked about. July, however, has given me a few stories to talk about so strap yourself in.
The tragic death of Naya Rivera
This was completely and utterly heartbreaking, wasn't it? Another Glee star taken too young. Made worse by the fact that her final act was to save the life of her little boy. Do I believe in the Glee curse? Honestly- yes. One death okay fine it happens, two is a coincidence, three, well something has to be up with that, right? What also acts as evidence is that the body of Naya Rivera was not found for days, only to be discovered on the anniversary of the death of Cory Monteith. No matter what, this was a story that really pulled on the heartstrings and my heart goes out to her son.
Coronavirus round 2
For a while there it looked like Australia was doing SO well, that we were coming out the other side of this global pandemic looking like absolute champs. AND THEN Victoria, they just had to go and mess things up for al of us. As I write this there are 4,542 active cases while WA has two, I'm not sure but I feel like that is saying something. Victoria has also imposed some strict rules in their state (they need it obviously): Metro Melbourne is in lockdown 2.0, face masks are compulsory if you are leaving the house, pubs, clubs, restaurants, beauty services are all closed. Melbourne is trying to contain this and yet the numbers continue to rise. To Mark McGowan: please keep the borders closed please.
Kanye West and well.. everything that's going on.
Is he running for President or isn't he? His mental health is certainly being questioned at the moment with what appears to be a bipolar episode. He is known for his bat-shit crazy antics, but what has been happening lately, it has surpassed the point of "oh it's just Kanye". Some of his comments have been totally inappropriate and just not what should be shared with the world. Telling the world that you have been trying to divorce your wife, that you wanted to abort your eldest daughter, tweeting "if I get locked up like Mandela, ya'll will know why" and claiming Kris and Kim were trying to lock him up, there was just a whole load of shit going on. I do feel like his mental health needs to be addressed more than America needs him as President.
Women ruled the Masterchef: Back To Win grand finale!
It took about fifty years but we finally made it to the end of Masterchef: Back To Win and the finale turned out to be all about the ladies! The final two battling out for the title of Back To Win champion were Laura Sharrad and Emilia Jackson, two incredible chefs who both deserved the title. The title was handed over the Emilia after a very close cook that included Laura burning her hand on a hot panhandle. Emilia was as cool, calm, and collected as ever and you couldn't even tell she was SO close to winning that money and the opportunities that came with it. Honestly, I just feel like the newsworthiness of this one was just that Masterchef finally finished because that just dragged on and on.
Ita Buttrose says millennials "want hugs"
Okay so I have always been confused about what is a "millennial" like was I classified as a millennial or as Gen Z like what are the parameters because it has always been a bit blurred. According to Junkee it is anyway one who is 38-22 and I am just going to follow along with that Junkee says, so that does include me... just.
During a Q&A the chairwomen of ABC, Ita Buttrose says that millennials lack resilience and need reassurance. Question for Ita here: have you interacted with a millennial lately? Apart from the couple hundred of them that you just fired? How about instead of hugs you give us job stability? What about a liveable wage? I could do without the hug thank you.