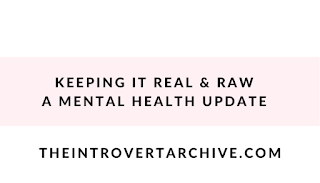 Well hello there! It has been a while since we have had any kind of chat her on The Introvert Archive, in fact, I think the last post was the May news story catch up, so the post after this will be the June edition.

Today I just want to be candid about mental health. It is probably more of a selfish post because I think I will get more out of being open and honest than anyone else will read this, but you gotta do what you gotta do right? Also, there is always the chance someone else will read this, and that feeling of being the only one going through depression and anxiety and mental illness and whatever else will know that they are not alone in their struggles. That maybe, just maybe there is a light at the end of the tunnel- for everyone.

It's been so long since I have done this, I have forgotten what to do, like where do I start? What do I say? I just cannot remember.

Alright- let's start with an antidepressant chat. I don't think I ever reported back in on how I was going with them since my initial post about having to find a prescription that works for me. So, update: we stuck to one medication for now over six months and to be honest, I don't know what I was expecting to be feeling like if they are working, I am not sure what I should be feeling while on them? Does that make sense? Probably not.

Basically, I don't feel depressed all day, every single day of my life which is an improvement obviously- so they are doing something. I think I expected to feel... more? I mean, I am numb, constantly. I'm not sad, I am not happy, I am average all day every day. On a scale of one to ten, I sit at a five- always.

Moving on to a small win for the mental health side of things- today makes two weeks of no anxiety attacks, a real feat for me at the moment. Before these two weeks I was having full-blown panic attacks at least every three days, one day I had two in twelve hours and I have never been so exhausted in my life. I wanted to curl up in the fetal position and stay there forever. That did not happen because it was a Friday and people showed up at my house, so the longest I managed to stay there were about four hours.

The anxiety was getting so familiar that if I woke up in the morning and didn't feel that lump in my throat or the heaviness on my chest, or the thoughts whizzing around in my brain I was a bit... confused? Like what is this strange feeling of feeling okay? I would then start to panic that maybe I was feeling okay because this was "it". You know how they say you feel better right before you die? Like the pain goes away? Yes, I have been watching too much Greys Anatomy.

That being said, the past two weeks haven't been all rainbows and happiness. I'm still anxious, just on that borderline of having a full-blown attack. I thought maybe today was going to send me into mental breakdown mode, but so far I'm holding together. It is, however, quite apparent that one little thing will probably tip me over the edge and tonight will turn into a disaster of tears and wanting to not leave my house. That, my friends, is manifesting in the worst possible form if I have ever seen it.

There is no lesson in this post. There is nothing I can say right now that will turn this into an educational post that will enrich your lives. This is just a real and raw "this is how it is" post. If you've read this and it's had absolutely no effect on your day- great! Thanks for the view. If you've read this and you've felt a little bit less alien, a little bit less alone- I'm here with you. Mental illness is one of the most alienating things I have ever experienced and if I can make at least one person feel a little bit less alone during their trying times, that is what I am here for.
anxiety depression health life lifestyle mental health real talk