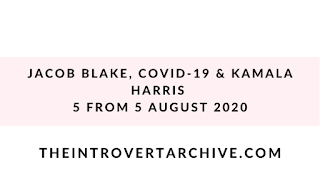 Five from five is back again for August- last month I was a few days early and this month I am a few days late and that is just hoe we have to roll here at TIA- no apologies will be made. If you have forgotten five from five is five news stories from the previous month that I have wanted to talk about on here but haven't and now is their time to shine. Sometimes you'll get political stories and then jump right back to pop culture to human rights and then all the way back to reality TV, we like to keep it mixed up here.

Story 1: Kamala Harris becomes the first Black women on a US Presidential Ticket

FINALLY, people of colour are beginning to have some representation among the seas of white politicians, although not nearly enough -I mean, it's a start, right? Joe Biden the Democratic candidate for the race for presidency 2020 chose Kamala Harris to be his right-hand woman, and if elected will be titled Vice President of the USA. She is the only Black woman in the US Senate and only the third woman to run alongside a US presidential candidate. What a women!!

The air is always a little heavier when we wake up on this side of the world to something so extraordinarily devastating happening on the other. At least two hundred people were killed and more than 5,000 people injured when a large fire broke out at the Port of Beirut before a gigantic explosion created a mushroom cloud and sent waves of terror through the portside city. 2,750 tonnes of ammonium nitrate that was incorrectly stored was revealed to be the cause behind the blast that caused in excess of $15 billion US damage. This was such a devastating event that I just couldn't ignore it for the five from five, but what is bloody incredible that in the last few days, a month from the explosion there is a report of 'signs of life' coming from under the rubble. That just absolutely flabbergasts me.

Story 3: Sco-Mo tells us a COVID-19 vaccine will be mandatory and then changes his mind.

There was quite the uproar when Prime Minister Scott Morrison announced on 3AW that the vaccine for coronavirus would be "as mandatory as you could possibly make it" which may have been the cause of him backtracking and changing his mind. Mr. Morrison then jumped on the mic at 2GB and said no one would be forced to have the vaccine. I don't know if anyone else noticed on Instagram but the number of people who suddenly became corona conspiracy theorists overnight when they heard about the possibility of a mandatory vaccine- well it skyrocketed, didn't it?

Story 4: The shooting of Jacob Blake

Another month, another story of police brutality and unnecessary force against a Black person. Its the all too common story that just will not let up, isn't it? On the 23rd of August, 29-year-old African-American man Jacob Blake was shot at seven times while walking away from Police to his car that held his young sons. Four of those shots hit Blake and has left him paralyzed from the waist down with serious damage to his organs. A bystander comments that Blake was not being violent, nor did he have any weapons in his hands. When will this end? How many deaths will it take for something to be done about this? People of colour do not deserve to be gunned down by white members of the police force who think that the badge they were makes them God. I want to say that the new Five for Five will hopefully not include a similar story but we know hope is not enough anymore.

In the final week of August, it was revealed that The Masked Singer, a reality TV show that I do not actually watch had hit a COVID-19 related snag. The show, hosted by the king himself- Osher Gunsberg was in the act of filming their season finale when the inevitable struck- a person from the Channel 10 crew who had worked in the studio had tested positive. A day later, another six people and then a few days ahead a further nine people had also tested positive for the illness. The show was being filmed in Melbournes Docklands complex, a city that was supposed to be in a state of complete and utter lockdown. So.. that begs the question, why was the Masked Singer allowed to continue being filmed? Why is any TV show set in Melbourne allowed to continue being filmed? There is SUCH a high number of cases that it doesn't make sense that people are further put at risk for the sake of a TV show that can be picked up where it left off once this is over.

Alright- August that's it you are over and out. Here is hoping that by the time I write the September five from five I can include more than one feel-good story! But at the rate that 2020 is going, who bloody knows.