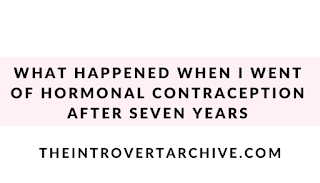 Around two months ago I made the decision to stop using hormonal birth control, or ‘the pill’, something I had been using for six or seven years. Basically, I didn’t know being an adult without having the security of the pill behind me.

When your fifteen or sixteen you just want something that’s going to reduce your risk of getting pregnant, you don’t stop to consider what you’re putting in your body. It’s only when you get older and start to do some research that you begin to think about what you’re doing.

There were many reasons for going off the pill, but it was something I was thinking about for a few months before I actually did it. I didn’t make the decision one minute and stop taking it the next day. I weighed up the pros and cons and I was terrified of the cons, weight gain, acne, God, I was scared of the cons.

Let’s focus on what actually happened to me, instead of the things I was shit scared of. Maybe you’ll find this experience a little more comforting than some of the horror stories and symptoms I found on Google.

I have never one to have much acne on my face, I’ve always been one to have it on my chest or my back. For the first month, I thought I had gotten away with the whole acne side of things, but then BAM month two. Painful, large pimples all over my chin and lower half of my face. Not those ones that you can pop easily and they go away, no these were the deep, sore, red, angry pimples that stay with you for at least a week. They are starting to calm down now, thankfully after a month, I stuck to my skincare routine and now I am getting one or two every now and again.

I would read one article that said you would become fertile right away and then another that said it would take a few months. I’ve taken plenty of pregnancy tests between stopping the pill and today and I can confirm that I am not pregnant.

While I was on the pill I would get my period and it would last two days- three maximum and it would be one or two cramps and that was it. I was so used to this that GOD I was not ready to be someone who had a five day period that was painful for the first two days. I was genuinely confused the first day because I was nauseous, I was getting cramps, it was bloody terrible. My second period was almost a mirror of the first so I am thinking this may be here to stay.

Look, I have never been able to distinguish between PMS and my mental illness but this past two months I have felt terrible around the time of ovulation and then again on the week of my period. Mood swings, uncontrollable crying- I mean this is me when I’m having bad mental health periods so it could be that as well- who knows.

DEFLATION OF THE BOOBIES

Look, I knew this was a possibility but I was certain that my boobs were already small so I would be fine. I was not fine. My boobs deflated at the beginning of month two, I assume when my body was beginning to re-balance my hormones and then boom- flat chest. Not complaining though, I like having small boobs.

I’ve never been one to get extreme bloating, not even on my period but since being off the pill I got bloated more often. God, it is uncomfortable.

Look, honestly, this could again be my mental illness. But, I feel that since I have been off the pill I do not feel balanced. I feel out of whack. I have hopes that this will sort itself out

Have you gone off the pill after an extended amount of time? What was your experience like?