Christian Porter and That Press Confrence 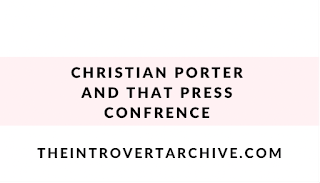 Around Australia today women are united by their rage at a press conference held in Perth by Attorney General, Christian Porter.

If you have been living under a rock here is the run down: last week our Prime Minister Scott Morrison, Labor Leader Penny Wong and Senator Sarah Hansen-Young received letters alleging a historial rape by a senior cabinet minister before he had joined politics. At the time, no names were named, until this morning.

This morning Attorney-General Christian Porter revealed himself as the senior minister at the centre of the allegations- he also denied the accusations. I am not here to play judge and jury, to determine if this man is guilty or not. I am here to dissect his actions and words during the press conference. The NSW Police have confirmed there is insufficient evidence to pursue a case.

The alleged rape took place in 1988, the victim was 16, Porter was 17, they met at a debating competition at Sydney University. Jo Dyer, a friend of the victim since she was fifteen years old described the women as “extraordinary.”

It is believed that in 2019 the victim had written to political members, including the PM and sought Police help, including a statement supported by journals kept by the women in ther teenage years detailing the rape and naming a “Christain.” In the early days of the COVID-19 pandemic, February 27, 2020 the women was overcome by her struggles and committed suicide.

Here is what Christian Porter had to say in today's press conference.

“I have thought long and hard about the implications for you of what I feel I have to say today. And I hope that whatever happens from this point that you will understand that in saying today, that the things being claimed did not happen, that I do not mean to impose anything more upon your grief.”

This was one of Porter's opening sentences, directed at the parents of the victim. Did no one else feel like this was a long winded and more politically correct way of him saying “Sorry your daughter died, but she's a liar.” ? Anyone?

“When something similar happened to the former leader of the opposition, everyone followed the accepted process and for a very long time they did that. With me, certain outlets couldn’t even give it a week without training, possibly convicting me publicly with allegations.”

Porter was very quick to compare himself with the 2013 investigation conducted by Victoria Police into the allegations that former opposition leader Bill Shorten had raped a 16 year old girl in 1986.

“If I stand down from my position as Attorney-General because of an allegation about something that simply did not happen, then any person in Australia can lose their career, their job, their life's work based on nothing more than an accusation that appears in print.”

While Mr Porter has concluded he will not be stepping down, or aside from his role he has decided to take “leave” for the sake of his own mental health.

“For the many caring family and friends who have asked me that question over the course of the last week ‘are you okay?’, I’ve got to say my honest answer is I really don’t know.”

What about how the victim feels? Her parents? Her friends? Her extended family? How are they feeling?

Mr Porter is the Minister for Industrial Relations: here is my question. Can you really be a minister that is advocating for Union officials to uphold certain standards when you, yourself are defending accuastions of rape?