Netflix's Ginny and Georgia Is Choatic... In The Best Way 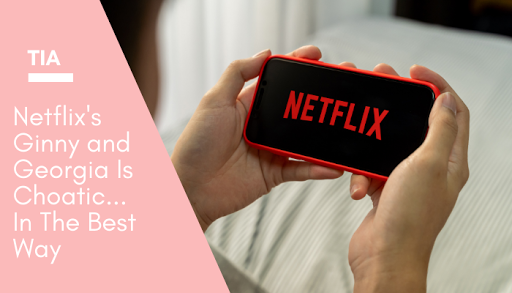 It is not often that we discuss TV shows here on TIA, but this one, this one has struck a chord with me and I feel compelled to write my feelings out. Because I do, have feelings about this show.

Context, if you have not seen the show. Ginny and Georgia is a Netflix original TV series, created by Sarah Lampert. The show is currently ten episodes long, but considering it has been number one on Netflix for days, upon days, do not be surprised if it gets picked up for a second season.

The show features fifteen-year-old Ginny Miller as she creates a new life for herself in a new town, at a new school, with new friends and new teachers. We also see inside the life of her mother, the ever-fabulous Georgia Miller. Georgia is a widow, a mother to Ginny, and a son, Austin, and now she is the Mayor's assistant… and girlfriend.

A big theme in this TV show is the mother-daughter dynamic between Ginny and Georgia. This dynamic is tested as Ginny begins to become her own woman, and as she learns more about the women her mother truly is.

Okay, now for my thoughts.

I was already halfway through the first episode when I heard about the T-Swift controversy and I knew I had to keep watching in order to find out what the comment was, in what way it was used. I am sure there were more people who also wanted to find the comment, so the fact that it was in the last episode, well, it speaks for itself.

Was the comment uncalled for? Yes. Was the comment one that could have been easily replaced with something else? Also yes. Netflix really should have picked up on that one and gotten rid of it. Any relationship they had with Taylor is now probably dead in the water.

To note, there are quite a few celebrity comments thrown in, including one about Bella Thorne being “a hot mess” and even a comment about the betrayal of Kylie and Jordyn.

Any other Aussie girls go into this show and could not put a finger on where they had seen bad boy Marcus before? I didn’t Google him until the end of the series BUT I have now realised where I know him from. Marcus is played by Felix Mallard who also played Ben Fitzgerald / Kirk on Neighbours, the son of Drew and Libby! Ah, I love an Aussie making it big in Hollywood!

Maybe I lived a sheltered life as a teenager, but does anyone else feel that perhaps the plot was a little bit old for the characters' ages?

So, in the show, Ginny has her sweet 16, and Hunter is referred to as “My fifteen-year-old son..’ by his mother. I forgot that these characters are kids, actual kids. I believe if they had been one or two years older it would have made more sense. Or… USA kids are rowdier and sexually active than those that I know of?

While the show is very chaotic there are some important themes that are discussed, and that is something that is important. It is important to talk about these things in mainstream media and to show that these are real issues.

Themes that are brought to the surface include body image issues, self-harm, mental health, family violence, sexual violence, and probably in the biggest capacity race.

So… should you watch it?

I mean, I would recommend it if you are like me and like to be ‘in the know’ about what everyone else is talking about. It is not a quick binge though, the ten episodes are nearly an hour long each, but once you’re in, you are in for the long haul.