Barnaby Joyce Is Back, But Let's Not Forget His Past Actions 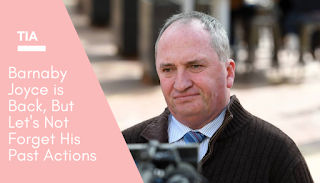 Was anyone else not expecting to check their morning news this morning to the headline "Barnaby Joyce Is Now The Leader of The Nationals Party, again." We knew there was a leadership spill in the National Party, but did anyone think Barnaby Joyce would actually return to the role of Deputy Prime Minister of Australia?

Nationals MP Michelle Landry put it pretty perfectly this morning "I think that if he became leader again there are women out there that would be unhappy with that." YEP- SHE WAS RIGHT. However, it has not just women that I have seen voicing their opposition to the re-instatment of Barnaby Joyce.

It has only been three years, hasn't it? Not enough time for us to forget some of his wrongdoings while he was last in this position. So, let's summarise.

First off, remember when he resigned in February 2018? The final push for his resignation came in the form of sexual harassment claims. Catherine Marriott, a West Australian businesswoman attended a function in Canberra in August 2016, it was there, she alleges that she was sexually harassed by Barnaby Joyce. Catherine Mariott had lodged a confidential complaint against Barnaby Joyce and somehow that complaint was leaked to the media.

The claim was dismissed, with "insufficient evidence" claimed by the Nationals Party. Catherine Marriott told ABC “I thought long and hard about this and I have no intention of talking about the incident,” she said. “My reasons for that is that I don’t want to be someone who is defined by that incident. I want to be able to have a career where the first thing that people think about when they meet me is not ‘that happened to her’.

While Catherine has never gone into detail about the incident, she has repeatedly talked about the lasting effect the incident has had on her. "I rang two of my closest friends and I told them what had happened, and they said they couldn't believe... they were just absolutely shocked, and they said, 'You can't tell anyone. You cannot tell anyone... you will be destroyed if this comes out'."

It was February 2018 and Barnaby Joyce was a man that was very vocal about holding high value in not only family but also in marriage. He was once quoted as saying "It's like marriage. You can't marry someone and then decide you want to marry someone else. Once you're in, you're in." Barnaby Joyce was once married to Natalie Joyce, before it was revealed that he, in fact, was not loyal to his marriage and was instead of having an affair with his staffer Vikki Champion, which resulted in two babies out of wedlock.

In August 2019 Barnaby Joyce made his opinion on abortion rights (something he shouldn’t even get a say considering he will never have to face the decision to abort a fetus from his uterus.) clear. During a speech to the House of Representatives, this is what he had to say: “To say he didn’t have the rights of other human life is to say he must be subhuman. I don’t believe that any person, any doctor, any parliament, has the power today to declassify another person as less than human, and by doing so removing their fundamental right to be alive. In the NSW parliament, they are debating whether Tom had no classification of human rights. Whether before his umbilical cord was cut, he was subhuman.” How does the saying go? No uterus, no opinion?

Remember the vile comments he made about people who had lost their lives in the Northern NSW bush fires in November 2019? It was a comment that the two people who had died were “most likely” Greens supporters that were forced to be denounced by PM Scott Morrison.

One thing is for sure, women will make their opinions heard at the next election and I feel it may result poorly for Barnaby Joyce. He will not be getting my vote.